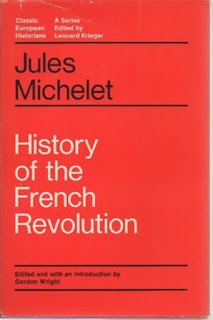 At some stage in the year 1789—the precise moment is debatable—there occurred in France a great social and political upheaval. This French Revolution gave rise, in embryonic form, to important concepts such as the class struggle, revolutionary dictatorship and, in the later stages, “elitist egalitarianism” in the form of Babeuf’s Conspiracy of the Equals.

Those, however, who see the revolution as a popular, egalitarian movement have failed to understand its true character. The French Revolution was a successful attempt by the bourgeoisie to destroy the feudalism which shackled their economic enterprise with old-fashioned regulations and which denied them the political rights they felt were their due. Throughout the, revolution’s course it was the bourgeoisie which controlled the various legislatures and executives, and its results were trade and commerce emancipated from feudalism, a law banning any trade unions (le loi Le Chapelier) and a system of indirect election benefitting the well-to-do. This was, of course, before Napoleon imposed upon the revolution the dynastic ambitions of the Buonaparte family.

There are, indeed, those who have protested that the first National Assembly, far from being a body composed of strictly bourgeois elements, was in fact packed with lawyers and other members of the liberal professions. But lawyers have always represented the interests of trade, commerce and industry—activities which are essential to their prosperity. The doctors, journalists and other professional people who sat as legislators were all notably in sympathy with liberal economic doctrines, and they were always shown to be afraid of popular uprisings such as that in Paris in July 1789. Thus the professions had effectively allied themselves with merchants, industrialists, bankers and agriculturalists, and could be relied upon to serve their interest.

These two books represent, in widely differing form, attempts to understand the role of the common people in the revolution. Michelet’s History first appeared in seventeen volumes in the 1840’s (of which this edition is a continuous selection). As such it is a good example of, and a grand monument to its age. Michelet is as much French Romaniticism’s representative historian as Victor Hugo is its representative literary figure. With a vigorous style, full of life, Michelet gives us his impassioned, apocalyptic and panoramic view of the revolution as the climax of the spiritual battle between the Catholic Order and the “principle of Justice”.

Unfortunately, in his eagerness to present the revolution as the victory of a united force—“the people”—Michelet overlooks important points of detail and produces certain inaccuracies. So insistent is he, for instance, in asserting that the revolution was a spontaneous outbreak of “Justice” and “the People” against a misery and oppression which he paints very eloquently, that he overlooks important differences in the interests of the bourgeoisie and “the people”, the main one being the contradictory demands of free trade and controlled bread prices.

Michelet’s book, however, has certain valuable aspects. It contains a brilliantly eloquent denunciation of Christian theology and extremely shrewd assessments of the true character of the so-called Absolute Monarchy and the mediaeval church in France. 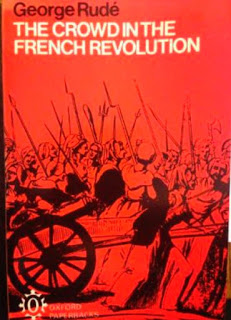 Revolution. Originally published in 1959 and now available in paperback, it was described by one historian as “a significant book which opened up some entirely new sources and showed how statistical precision can be brought to the study of riots”. It is indeed a close study of the behaviour and composition of the Parisian crowd. Rudé, writing from the Marxist viewpoint, is concerned with breaking away from the tradition which until recent times treated the crowd, as he says, “as a disembodied abstraction and the personification of good or evil”, and with examining the crowd in a more scientific spirit. (The book is amply supplied with tables showing the composition, geographically and class-wise, of the crowd and the prices of various commodities at different stages of the revolution).

The crowd, or sans-culottes—called thus because they could not afford breeches—was a heterogeneous body, composed not only of the working class but of small shopkeepers and independent craftsmen as well. Rudé paints a picture of a working class still in transition between feudal and capitalist societies, and not truly distinct from other sans-cullote elements.

However, although the wage-earners in Paris had as yet developed little class solidarity, they did have a vague idea of their cohesion as a class. The breakup of the guild system had accentuated the gulf between masters and journeymen, and there had been a strike as early as 1724. Disputes over wages and conditions continued up till 1789. However, the large demands which food made upon a man’s wages produced a situation where the crowd was concerned more with keeping down prices than with raising wages.

Rudé points out that a variety of motives existed for the crowd’s revolutionary actions, among them dismay at high prices and uncertain food supplies, a belief at first in the king as its champion against the aristocracy and the church, and then in a republic. The crowd was not a totally inarticulate mob merely seeking immediate economic gains. Although economic factors may have influenced them, strongly and often, these went hand in hand with beliefs, however unsophisticated, in political principles.

In this context, Rudé well notes that the bourgeoisie, even at that early stage, were determined to prevent the wage earners gaining any influence, and that, although “whenever it (the crowd) advanced . . .  the aims of the revolutionary bourgeoisie, it has been represented as the embodiment of all popular and Republican virtues”, the bourgeoisie were unwilling to share power with this “virtuous” body. Property qualifications were required from would-be representatives. Rudé also points out “the ferocity with which the bourgeois . . .  of the National Guard dispersed the Champs de Mars demonstration” (a protest at Louis XVI’s flight from France).

Rudé’s book is an informative and extremely readable study of the popular aspect of the French Revolution.