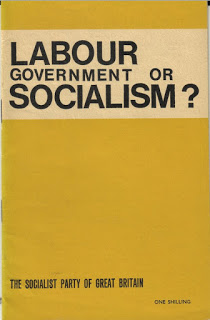 Why are so many Labour voters disappointed? Why is there a swing to the other parties at by-elections? Why do more and more people not trouble to vote?

Why do so many people become cynical about politics and say that nothing makes any difference? Why have some trade unions that are affiliated to the Labour Party threatened to withhold contributions and to form an independent ‘trade union party’?

This new 36-page Socialist Party pamphlet, out soon, answers these questions and exposes the uselessness of this and previous Labour governments. It shows too how Labour’s avowed aim of ‘making capitalism work’ leads them to support wage restraint, unemployment and profit-making.

“Experience proves beyond question”, says the pamphlet, “that the position of wage and salary earners is the same whether capitalism is administered by a Conservative or by a Labour government. Some workers believe that this need not have happened if the Labour government had chosen to follow a different course. The Socialist Party of Great Britain does not take that view. What we have experienced has been the inevitable consequence of perpetuating capitalism. Within capitalism there is no escape from its economic laws”.

You can order copies of this topical pamphlet by writing to the Socialist Party (Dept. SLG), 52 Clapham High Street, London, S.W.4.