The above figures—with the exception of the share-out calculation which is our own—have been taken from the report of the Commissioners of Inland Revenue for the year ended 31st March, 1965, published in February, 1966, at page 170 in the section on death duties. And we now reproduce the table in full:— 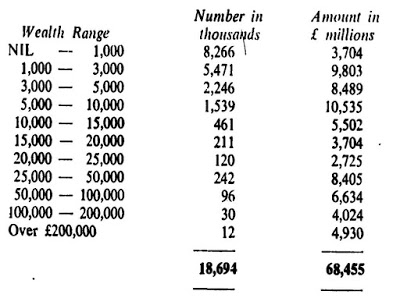 Estate duty is levied on amounts of £5,000 or more, so you can see from the table that 85 per cent of the wealth owners do not own sufficient to be brought into charge for the duty. This, in fact, was confirmed in the Estate Duty Statistics for the year 1964-65 where of the 295,798 cases reported 79 per cent were exempt from duty. The analysis of the estates shows, as was to be expected, that the smaller ones comprised of traditional working class savings such as Post Office Savings, National Saving Certificates and Life Assurance, plus houses with mortgages. Whereas the larger estates predominate with stocks and shares as well as property.

Capitalist sources continue to supply us with evidence that capitalism is the unequal society. And Mr. Callaghan can have as many budgets as he likes introducing capital gains tax, corporation tax and selective employment tax, but it will not make any difference to a society that organises itself on the basis of production by the many for a profit for the few.

It is possible you may solve your own individual problem by transferring from the working class to the capitalist class, and then you would have to engage accountants, solicitors and barristers to sort out your estate duty problem. But we cannot all make that move, as capitalism is dependent upon a working class continually producing profits. What we can do together is to say that we have had enough of capitalism and pull the political chain that will flush it away. Then we shall not have to insure for the future. It will be ours.

Wilson’s man
In so far that most trade unions are affiliated to the Labour Party it is usual to expect that their leaders will support the Government in general, whilst at the same time producing good reasons why their own union cannot do so.

Even though the National Union of Hosiery Workers is not affiliated to the Labour Party, its President, G. E. Dearing, must have brought much joy to Harold Wilson when in his address to the Union’s Annual Conference this Whitsun he was “pragmatic” to the point of absurdity.

The hosiery industry has been the subject of take-overs, both real and abortive, in the past few weeks and after expressing regret at the loss of some names well-known to the industry, Dearing said of the newcomers who he described as “outside companies and finance groups”—

More and more, we as a union find ourselves dealing with industrial situations influenced by decisions of faceless management; dealing with people who, by the nature of things, are compelled to measure progress in terms of money and not men and women.
While recognising and accepting that profits are the lifeblood of any industry, there are limits to the acceptability of the pressures that can be applied to attain them.
While we will willingly work with the large, strong, powerful elements, we must take care that there is a place for the smaller units’ and ensure that their interests are safeguarded.

The idea that a union should take an interest in a special group of employers is preposterous. In any event the wish of today’s small firms is that they become tomorrow’s large firms. And we have not yet seen it reported where any party to a take-over consulted the workers employed. The interests agreed about by the parties and their advisers are those of the shareholders.

Also unrealistic, and even dangerous, is the notion that names you know are safer than “faceless” men. Is it in any way preferable that you should be exploited by some one you know, as your dad was by his dad, and so on? Surely what should concern us is that we live in a faceless society. Where all employers exploit us to the best of their ability and are exhorted by the Government to improve the process.

Not only hosiery workers, but all workers, must eventually realise that in the society where “profits are the lifeblood of industry” they are the donors.

The build up boys
If you have a television set and look at the commercial channel, where they show programmes between the advertisements, you must have wondered at the rapid progress being made by the manufacturers of some products.

Within the past few years some items have been advertised for the first time, followed after a short interval by a second appearance when they are described: as new and the third time round they are described as improved. Meanwhile the soap powders just go on all the time becoming whiter and brighter.

Can it be that the items advertised are being improved, whilst those that do not remain cheap and shoddy? The answer is no. Apart from certain restrictions on outrageous claims for patent medicines, there isn’t anybody that has to vet the validity of the claims. Take, for example, the well-known advertisement of “fabulous pink Camay”. This was for a tablet of soap being sold for a shilling. The announcer claimed it contained perfume worth nine guineas per ounce.

We may not have realised 1984 and Big Brother may not be at the other end of the cathode tube—but the build-up boys are! Today advertising is a big, powerful and growing industry. It has become highly organised and sophisticated. The large agencies employ people skilled in multifarious arts and sciences, and they would claim to know you better than you know yourself.

Their researches enable them to categorise people so that, apart from certain geographical variations, they know the make-up of families, the likely income and the spending habits. From this point their task is to get you to take their client’s product—say, beer instead of milk—and their client’s brand. instead of a competitor’s.

At the same time the advertising industry claim to be giving a service not only to their clients, but to all people, although we are still awaiting the first announcement that a product has been withdrawn because it has been found to be inferior to that of a competitor. Further the industry claims that it helps to create demand and thus plays a part in continuing full employment and the affluent society, although a number of newspapers now carry regular columns on advertising giving the news of manufacturers changing their advertising agency in the endeavour to boost sales, or even bring a halt to falling sales. And although the full report on the collapse of the John Bloom empire has not yet been finalised it was well-known that he tried desperately to save his business by even more advertising, but this could not stave off the crash.

Advertising personifies capitalist society, telling you on the one hand you can have everything and on the other justifying why you should accept something inferior. If you are a lowly paid worker and can’t afford to buy butter, then join the “in set’’ and buy margarine containing ten per cent butter. And so the nauseating persuasion goes on night after night.

Socialism will be a democratic society in which information will be collected and disseminated on a scale never seen before. So that men and women will have the free choice to discuss and decide what shall be produced. When that day comes, the adman goeth.