Book Review: What is the Left?

The Left in Europe since 1789 by David Caute (Weidenfeld and Nicolson, 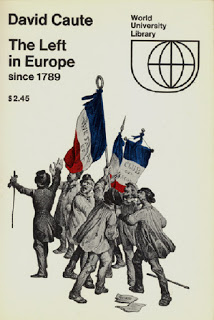 12s. 6d.)The Socialist Party of Great Britain, although it has Left ancestors, is not a party of the Left. Wc have always refused this title partly because it is a term which categorises the parties of capitalism and partly because of its ambiguity. Caute defines Left in terms of “popular sovereignty.” political and economic. He himself is a man of the Left and would probably regard himself as a sympathiser of Marxism. He is also, however, one of those who denounce as dogmatic those who point out how people like him distort Marx.

Commodities have objective values dependent on the amount of labour embodied in them. Yet market prices arc invariably higher. The difference, “surplus value,” is pocketed by the capitalist or middleman and in this way the worker is exploited.

This distortion was too crude even for A. J. P. Taylor, an old hand in this game (New Statesman, March 4th).

All this suggests that Caute might really believe that, as the text in fact reads, the 1891 Erfurt Programme of the Social Democratic Party of Germany was written by Marx—eight years after his death! Such is the shoddy workmanship found in a book by a man currently billed as a brilliant young academic.

Caute’s twists and turns to include the so-called Communists in his category of Left rival those of the agents of Russian State capitalism themselves. He records their totalitarianism and authoritarianism, their cult of leadership and the forced labour camps and anti-semitism of Russia. Yet still, for Caute, they rank as Left, even extreme Left. The attitude of “the Left” to Russia suggests that perhaps hypocrisy might be a better yardstick than popular sovereignty.

As a history trying to cover over 250 years in as many pages this book is inevitably superficial, but the many illustrations are interesting.