The Real World of Democracy by C. B. Macpherson (Oxford University 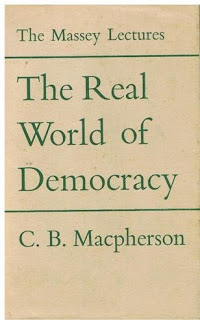 Press, 12s. 6d.)This book by C. B. Macpherson, author of the materialist study of 16th and 17th century English philosophers The Political Theory of Possessive Individualism, is a collection of lectures given over Canadian radio in 1965.Macpherson, argues that the liberal theory of democracy (competing political parties) is not the only valid one. In the “communist” and underdeveloped countries equally valid theories have been evolved. For them democracy means what it used to mean—rule by and for the poor. He correctly points out that Marx held that the working class would organise to get state power and then use it democratically to dispossess the owners of the means of production and set up Socialism. He notices too that Lenin departs from Marx in his theory of the vanguard party acting and ruling on behalf of the working class—but agrees with Lenin. What Marx overlooked, he suggests, was the question, “How can the debasing society be changed by those who have themselves been debased by it?” Macpherson says it can’t:

In a revolutionary period, therefore, when a substantial part of the society senses uneasily that it is dehumanised but does not know quite how, or when it is so dehumanised that only a few of the people at most can be expected to see that they are dehumanised, there is no use relying on the free votes of everybody to bring about a fully human society. If it is not done by a vanguard it will not be done at all.

This was precisely the position of the pre-Marxian revolutionaries of Europe like Blanqui and the anarchists. They held that only a conscious minority could overthrow the ruling class. Marx emphatically rejected this idea. As he and Engels wrote as early as 1848 in the Communist Manifesto, the working class movement “is the self-conscious, independent movement of the immense majority, in the interest of the immense majority.” Marx argued that men change themselves in changing society; man and society change together. The Socialist Party of Great Britain still insists that the socialist revolution can only be democratic and that minority action cannot lead to Socialism. Macpherson disagrees and takes the rulers in Russia at their word, that they represent the working class and are not a new ruling and privileged class.

This is the great weakness of these lectures. When it comes to demolishing the philosophical justifications of capitalism current in the West, Macpherson is excellent. He shows how capitalism necessarily involves the exploitation of those who work by those who own the means of labour. He exposes the myth of “scarcity in relation to unlimited desires” by which social inequality and privilege is justified:

We have been, or rather can be, liberated from the dilemma of scarcity by the new productivity of which we dispose in prospect. We can see now that men are not by nature infinitely desirous creatures, but were only made so by the market society, which compelled men to seek even greater power in order to maintain even a modest level of satisfactions . . .
An overmastering consciousness of scarcity had to be created in order to justify the capitalist society and to give it its driving force. An all-pervasive awareness of scarcity was needed both to justify the operations of those who came out on top and to motivate those who stayed below and had to be made to work harder than they had worked before.

He speaks of the prospect of a “society of abundance” replacing “an economy of scarcity.”

However he states categorically that the social system in Russia and other one-party states are not exploiting societies:

They do not diminish any man’s satisfaction by a compulsive transfer of part of his powers to others for the benefit of others.

Don’t they? In these states a privileged minority does monopolise access to the means of labour so that the majority can only use them at the price, as it were, of handing over a part of what they make to this privileged minority— which has evolved from the very vanguards which took power (or claimed to take power) to introduce a classless society. The lesson is that on this point Marx was more perceptive than Lenin.