Capital is international. You only need to walk around the City to see this. Banks from nearly every country in the world can be found, including three which some would have us to believe are “socialist” banks (whatever they might be!): the Moscow Narodny Bank in King William Street, the Bank of China round the corner in Cannon Street, and the Zivnostenska Banka in Bishopsgate. The Moscow Narodny is a British company financed by Russian capital. The other two are branches of banks in China and Czechoslovakia. The Bank of China, incidentally, has existed since 1912 and the Zivnostenska Banka since 1868. They fell into the hands of the so-called Communists when they got political power in these countries.
The Moscow Narodny Bank had a somewhat similar origin. In 1912 a central co-operative bank was set up in Moscow called the Moscow Narodny (i.e. People’s) Bank. The original MNB had branches all over Russia and one in London. After the Bolshevik coup the MNB in Russia ceased to exist as such and the assets and liabilities of its London branch were taken over in October, 1919, by a British private limited company formed for the purpose— the present Moscow Narodny Bank.
When by 1921 social conditions had forced the Bolsheviks to recognise that the development of capitalism was the only possible course for Russia, other companies were set up with Russian capital in Britain and elsewhere: in merchant banking, insurance, shipping and trading (Arcos was the trade name of many). The Bolsheviks at this time made no attempt to deny what these were: state capitalist concerns. Today the only one of these companies left in Britain is the Moscow Narodny Bank. In January, 1932, it absorbed another Russian-owned bank, the Bank for Russian Trade. At first the MNB had been concerned with financing the trade of co-operatives and only later became a merchant bank for Anglo-Russian trade generally.
Before the war the MNB had branches in Paris and Berlin. Since 1963 it has had one at Beirut, the banking capital of the Middle East. Merchant banks finance trade by discounting bills of exchange and granting advances to traders. This is what the MNB does. It concentrates on short-term financing transactions in the exchange of goods, preferably by bills on London of 90 or 180 days. Banks use money for which they have no immediate use to invest in securities or to lend for short periods. The MNB acts like other banks: it has money in British Government Securities, it lends to the discount houses, it intervenes in the foreign exchange market, it lends to local authorities. It is this last that attracts the publicity. After all a Tory council borrowing from a Russian bank is news (it must also create problems for local CPers who blame high council rents and rates on high interest rates). In fact, this is just a side line. The MNB is, as its adverts in the Economist and Financial Times claim,

the City’s specialist in the finance of East-West trade, and is in daily contact with banks in the USSR, in the Socialist Countries of Eastern Europe, Asia and Cuba. As well as our specialist East-West trade services, we undertake all normal types of international banking transactions. These include both international trade finance and money and exchange operations.

In recent years East-West trade has been growing and so has the MNB as the following table shows: 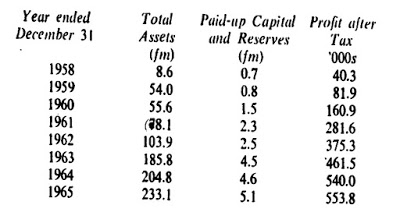 This year no dividend was declared, but last year it was 12 per cent. This went to the shareholders, various trading and banking concerns in Russia.
The MNB is fully a part of the City and proud of it. As Chairman A. I. Doubonossov said in his Report for 1964:

I am happy to say that we are now very much a part of the London money and exchange markets and that we are generally accepted as a prime bank both here and abroad.

This year he pointed out that the MNB was large enough to receive, along with the other banks, the circular from the Bank of England telling banks to limit their sterling lending to the private sector.
Russia has one other bank in the West, the Banque Commerciale pour l’Europe du Nord in Paris, which was set up in 1925 as a French limited company. Russia is also planning to join the gnomes in Zurich. It has applied to the Swiss authorities to set up a bank to finance Swiss-Russian trade. This is thought to be connected with a desire to sell more gold, a task till now handled mainly by the MNB.
These banks are, of course, only a symbol of capitalism in Russia. Russia would be capitalist even if they didn’t exist. But as Russia breaks more and more into the world market its banking activities are bound to spread. Which should provide some problems for its admirers abroad who are always denouncing “finance capital”.
Adam Buick