Film Review: Juliet of the Spirits 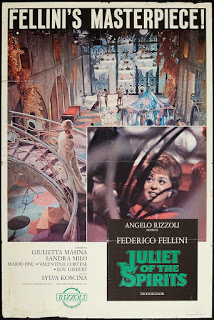 Juliet of the Spirits, directed by Federico Fellini
We have scarcely settled in our seats when we are transported into a magic garden. The lush vegetation parts and we gaze on to what appears to be a house of the type to be seen in every very posh area, but which on later reflection we realise to be a very pale imitation of an ancient feudal manorial castle set in its own grounds. As if to emphasise this point, the next scene is set inside the “battlements” and we see the lady of the house surrounded by her ladies-in-waiting attending to her toilette. Great emphasis is given these early scenes and we are left in no doubt of the deliberate play on the analogy between the feudal ruling elements and our latter day parasites.
What are we discussing? Frederico Fellini’s latest film Juliet of the Spirits. Fellini, who has made such films as La Strada, La Dolce Vita and “8½’ must command the attention of those wishing to take a very close and keen look at the world they are living in. For this is precisely what Fellini has done. His skill lies not just in his techniques of film making, but more precisely on his penetrative insight into human behaviour and its background of the modern day capitalist world with its money grabbing ambience of privilege and deprivation, wealth and poverty, power and impotence.
In particular, Fellini sets his films in Italy, and he conveys with Goyaesque flashes of insight the upper crust of Italian capitalist society, with its pimps, gigolos, sycophants and hangers-on of every type and description, their idle chatter, their endless quest for amusement and diversion to still the boredom of useless and inactive lives, their constant almost diseased preoccupation with their bodily needs and desires, sex rating only second to food. But Fellini makes clear the universal application of his searing indictment (and this has occurred in all his latest films) by the introduction of the same brand of parasitical element from other countries all over the world, each with their own characteristic “national” qualities with particular reference to France, England and the U.S.A.
Is there a particular socialist appraisal of this man’s work? There can be no doubt that there is. Underlying all the situations and characters appearing in Fellini’s films, is the class divided society of capitalism which is universal in the world today, and in which virtually every human being in the world is involved in one way or another. Fellini does not search in the heavens or in some mysterious recess of the human psyche to explain why people talk and behave as they do. He searches, and finds ample cause for investigation in, their immediate environs, that is in their economic and social background.
Guilietta, the central figure in Juliet of the Spirits, and of the flimsy plot on which Fellini hangs his work, is a middle-aged woman married to a wealthy man whose source of wealth is indeterminate but substantial. He brings home with him one evening a coterie of friends, a motley crowd who obviously represent a spectrum of the upper crust and their parvenus. Their behaviour, talk and manners would be more suited to the circus floor, not to be too unkind to the undoubted talents of circus artists. Throughout the film this crew or their indistinguishable next-door neighbours flit across the screen in one scene or another and in situation after situation, as if Fellini is determined that we shall not be allowed to forget the follies and foibles of our so-called betters.
Our hero husband is no longer sexually interested in his wife, and he has attached himself to more attractive mettle, but presumably he must keep in line with bourgeois family morality, so he dissembles as best he can to his wife. She, simple soul that she is, having had a stern religious upbringing, takes a little time to cotton on. On the urgent advice of her sister, a lesser innocent, she puts the matter into the hands of a detective agency. The meeting at the detective’s office is a brilliant microcosm of every solicitor’s and lawyer’s office where the sordid facts are covered over with sugared words, double-entendres and hypocritical pretensions. The bill, with its lengthy logistics, is never presented . . .  till the end. Although she is a woman fully acclimatised to the corruption and double faced morality of her class, our heroine sits through it all apparently mute and unbelieving.
All in all, the character and behaviour of our heroine seems to be at odds with her class background. This in possibly the weak point of the film. The spirits mentioned in the title of the film are those which Guilietta finds herself subjectively tormented by. Whether this is just a useful peg on which Fellini hangs some brilliant scenes, or whether they have other subtle purposes, is difficult to determine. In any event, we are continuously led back to the real world around us and all the film’s characters never cease to be palpable and tangible. In other words, Fellini, the arch realist, is having a little game. Poetic licence, no doubt. Those who have seen La Dolce Vita may be disappointed. There is not the fierce clarity and relentless exposure of every aspect of our society, high and low.
In his earlier films, the Socialist could draw his conclusions clearly. Now it is no longer so. Perhaps Fellini has mixed too much among the higher circles which he describes with such devastating accuracy. Has he forgotten the wider world that he depicted, for example, with such compassion in La Strada?
Max Judd