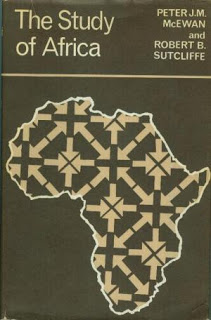 The Study of Africa by Peter J. M. McEwan and Robert B. Sutcliffe (Methuen 42s.)
The vast continent of Africa—5,000 miles from the Mediterranean to the Cape, and 4,600 miles from Senegal to Somalia—is changing rapidly. More rapidly in fact than any other part of the world. It needs to move fast if it is going to catch up with the old-established Capitalist states; it has got a very long way to go.
Africa was the last great area to be conquered and exploited by the European powers. For centuries the settlements were largely coastal, trading posts for trade with the interior, victualling ports for ships bound for the Orient, and, of course, depots for that most profitable of commodities, slaves. Not until well into the 19th century did the Europeans really move in, so that the work of industrialising or exterminating tribal peoples has not progressed as far as in the Americas or Australasia.
Many areas of Africa have had only about sixty years of colonialism, and millions of people still live a tribal existence away from the industrial areas and modem communications. Non-European Capitalists are still rather small in number, but they arc growing, and display all the vulgar ostentation associated with the newly rich. It is on them that the job of breaking tribal barriers, and producing an industrial proletariat, will fall.
With so much happening in so vast an area, Africa is somewhat baffling, and poses a mass of questions. Why was the continent late in being exploited? Why have so many African States gone totalitarian? The Study of Africa is a useful textbook on this subject It describes the physical environment, the historical development, and the contemporary scene. Why, for example, has the southern part of the continent developed in a different way to the rest?

“The nationalism of East and Central Africa was handicapped in a way that the West was not: namely, by the presence of large numbers of white settlers. The climate and land of the area were more conducive to European farming and consequent settlement.”

It was these settlers, basically farmers rather than traders, or exploiters of mineral wealth, that built up a large white population, large enough to enable them to keep their grip on the State machine. This has been brought to the forefront again in the last few weeks by Rhodesia.
The book is well served with maps and appendices.
Les Dale