Book Review: What is Politics 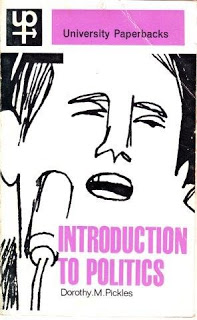 Introduction To Politics by Dorothy M. Pickles. Methuen, University Paperbacks, 9s 6d.
“I am not interested in politics,” is a statement that is made with monotonous regularity, usually by people who sincerely imagine that politics are something existing outside of society. They regard politics as a kind of superstructure built up around the realities of government, which can be ignored while they deal with the important things of life, such as the day-to-day problems of existence.
Problems are of course one of the few things that workers are never short of. At the time of the last General Election, a member of a much publicised quartet stated that the “Election was nonsense,” a gem of wisdom that was given full publicity in the press. Somebody had probably told him that he was a philosopher.
But the important point is, that such a remark must have been acceptable to many of his admirers, otherwise the publicity boys would have quietly stifled it. Needless to say the General Election wasn’t nonsense to the capitalist class, who were once again confirmed by it in their position in society.
Developing from this idea come further statements such as, “Politics are a dirty game,” and “Politicians are in it for what they can get.” Politics and Politicians often are dirty, but in modern society no politician stays long in power unless he has the backing of the electorate, in other words politician’s reflect the society that places them in power.
One of the dangerous results of these attitudes is the belief that politics can be dispensed with by electing a non-politician, such as a famous soldier, to power. The fact that the soldier, upon election, behaves like all the others, is usually lost on the people who elected him. Totalitarian parties will always claim that a one-party stale is above politics, and the promise that they will clean up the state machinery, is always one of their main arguments.
The truth is that any action to control any society, whether primitive or complex, is political and if people refuse to take political action which is in their own interest, others are only too willing to fill the gap, and run society in their own way.
Introduction to Politics by Dorothy M. Pickles, the latest of the very useful series of University Paperbacks, begins:

The practice of politics is necessarily as old as society itself. Wherever men live in a community, they must accept certain rules of conduct, if only to safeguard the existence of the community itself.

The study of politics, which is sometimes called political science, is born when men begin to speculate about the rules by which they are governed, or by which their ancestors were governed, when they begin to ask whether these rules ought to be accepted, or ought to have been accepted in the past, why some societies chose different rules from others, or whether it is possible to discover general rules of conduct which could or should be applicable to all societies.

Mrs. Pickles traces the development of political organisation from its primitive beginnings in “ . . . a few traditions handed down orally from one generation to another to the whole complex set of constitutional and governmental regulations of the modern state.”
This is a book which contains much useful information, and many controversial statements, and which is well worth the effort of reading.
Les Dale