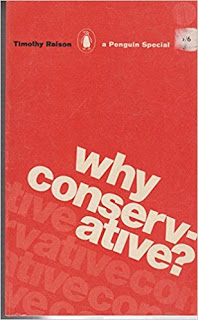 So this is the general election month at last. Probably by the time you read this, your letterbox will be bulging with the paper promises of all those who are desperate for your vote. For the first time in five years, you will matter.

But this moment is not something which has landed on us out of the blue, just like that. For some time we have known that the poll would take place in the autumn and the parties have been busy girding their loins for battle. Although you will now have the official election policies of them all, this does not mean that they have been silent these last few months. All sorts of people have criticised and promised to remedy all sorts of problems.

In June of this year, three books were published in the Penguin Special series. They are (as each jacket says) personal and unofficial statements, but they are interesting as an insight to the sort of thinking which characterises the main political parties. For instance, Why Conservative? by Timothy Raison could quite justifiably be called “The Waffler’s Handbook”. The Tories have been in power for quite a long time and there’s a fair chance of them winning again, so caution and circumspection—is the keynote of this book.

Politics, he tells us, is “. . . the search for power to achieve ends that the seeker considers desirable”. He does not think that conflict in society is harmful; it may be “essential to creativity”. The Tory Party apparently has “the masculine qualities of vigour, courage, independence, self-reliance and clear sightedness”. It “combines flexibility in policy with a firm psychological and emotional base”. Meaningless, you would say? So would we, but this is the sort of stuff which you arc asked to give serious consideration.

Nevertheless, if we thumb through this book, we can pick out some matters on which Mr. Raison commits himself more firmly. Did you know, for example, that distributed profits are good for the community (he doesn’t tell us how), and that there is money to be made if only you will work for it? –that’s an old chestnut if ever there was one. He makes no attempt to square this up later, when he admits the need for the welfare state to alleviate the worst aspects of poverty. For the usual commercial reasons, he doesn’t like the welfare state becoming too embracing. Company medical schemes, he thinks, may be preferable, because they would cut down lost production time and old age pensioners would cost less to the State if they lived at home instead of in institutions.

On foreign policy, we are treated to the same old story. The need for alliances, protection of British Capitalist interests abroad. But Raison cannot really make up his mind whether Britain should have nuclear weapons or not. 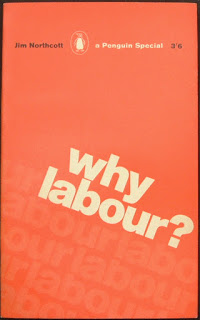 Now contrast this with Why Labour? by Jim Northcott. His party has had thirteen years in opposition and his writing reflects their current optimistic mood. Not for him the restrained approach of Raison. He is much more detailed in his approach to the familiar problems of working class life, and makes no bones about the actions which he thinks a Labour Government will take, if only we will place our trust in them.

Housing comes early in his list of problems—shades of 1945—and once again we are assured it can be solved. Building Co-operatives, lower interest rates, more council houses, a land buying commission, spreading jobs more evenly; these are some of his suggestions. He admits that working class home ownership is not the unmixed blessing that some people think, involving as it does the worry of mortgage payments, repair costs, etc., but even this does not lead him to the obvious answer—production for use.
He is very proud of the National Health Services — “ the envy of the world”—but opposes additional charges for prescriptions, forgetting that these were started by the last Labour Government. In addition, we are promised more hospitals, medical schools, preventive medicine, improved pay and conditions in hospitals, more trained social workers, and so on through the list. Name some fault or oppressive facet of the present scheme and you’re almost sure to find that Mr. Northcott has an answer.
On education he is, of course, in favour of smaller classes and more university places. He puts the naive view that the object of education under capitalism is “to enable all to realise full potential” yet at the end of the chapter quotes the Economic Cooperation and Development Organisation’s opinion “that higher investment in education is likely to yield a higher economic return than higher investment in industry”. He admits the superiority of public school education but it is difficult to discern just what position he envisages for them under a Labour Government. Not that it matters overmuch. Most workers will never get the chance to send their children to public schools anyway.
We are guaranteed plenty of all the good things of life. How are they to be paid for? Why, by taxing the rich more heavily and “spreading the burden more fairly”. But that the rich will still be rich enough to pay is an essential prerequisite and one may be sure that a Labour Government, no less than any other, will see that they stay rich.
The cry for increased exports figures prominently in Mr. Northcott’s reckoning. He is at one with the other parties on this. But, of course, the exports must be “ planned ” and imports “ controlled ”. In fact this particular chapter (No. 8) is simply loaded with plans of every sort, including steel, electricity, research and manpower. Which only goes to emphasise just how unplannable capitalism really is. Mr. Northcott has not grasped this lesson, despite the record and experience of the last Labour Government.

Why Liberal? You may well be tempted to ask that again when you have read the last of these three, written by Harry Cowie. With many years of wilderness behind them and not much chance of forming a Government this time either, the Liberals can afford to be the sauciest of the three outfits. Mr. Cowie’s book is positively encyclopaedic in the quantity and scope of his promises. Right away, we note that the Liberal Party is the classless party, so everyone must benefit from their proposals.

If you return the Liberals, Mr. Cowie expects them to:—modernise the Government machine, stimulate economic growth, re-plan our cities and stop the Southward drift, solve the housing problem (yes again!), improve transport and solve the traffic problem, have a ten year educational development plan, greatly increase old age pensions and abolish the earnings rule.
Surprisingly he gives profit sharing only a brief mention but thinks that employees should be allowed representatives on directors’ boards, as a recognition of the “common interest of both sides”. But the workers would still be workers and the bosses would still be bosses. That much is painfully obvious from the rest of this chapter.
Mr. Cowie wants a “new partnership with Western Europe” as part of a Liberal foreign policy and quotes the words of former Liberal Leader Clement Davies, that the common market is “the greatest step towards peace which has ever been taken”. He doesn’t tell us how or why, and anyway the stupidity of such a statement is apparent when later in the chapter he enters into the usual discussion on nuclear and conventional arms. As a sign of his confidence in the peaceful influence of the Common Market, he is in favour of the British forces in Germany being increased to four fully equipped divisions.
You could almost ask: What is there to summarise? There is a choice of sorts, if you like, between three variations of the same theme capitalism. It does not matter which one you make from the point of view of solving your problems— they will still be there whichever leader is called to Buckingham Palace. Why Conservative, Labour or Liberal? Why indeed!
Eddie Critchfield