Book Review: ‘The Other America’ 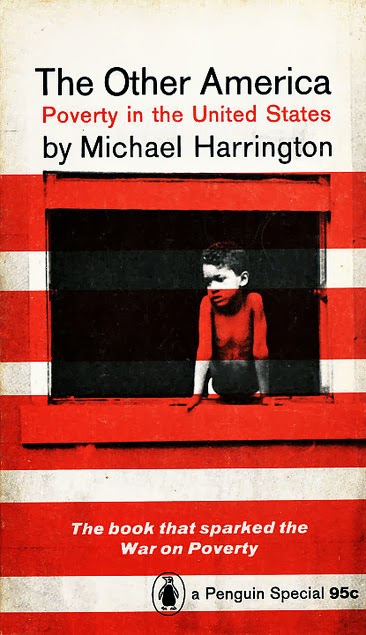 There is a pretty little myth that America is the land of milk and honey and the place where everyone, but everyone has his own car and lives in ease and comfort. It is difficult to escape the picture handed down to us by Hollywood that spacious houses and gracious living are the norm, perhaps because like so many stories from across the Atlantic, it is put over in such a big way. But it is false, nonetheless.

This much we can learn from Michael Harrington, who tells us in his book The Other America (Penguin Special, 3s. 6d.) that there are 40-50 million people in U.S.A. struggling along in conditions of direst poverty. It is no good trying to laugh this one off as just another Yankee story, because Mr. Harrington supports his claim with a wealth of data from government sources. Yet such is the competence of his style, that he manages to bring home to us in a frighteningly personal manner the human tragedy of these “invisible millions” as he calls them. Invisible, that is, to the superficial observer who is not prepared to probe the thin crust of surface appearances, and understand that poverty reaches much deeper than the shirt on your back. The author is careful to stress this very point early on, when he says:—

“In Detroit the existence of social classes became much more difficult to discern the day the companies put lockers in the plants. From that moment on, one did not see men in works clothes on the way to the factory, but citizens in slacks and white shirts. This process has been magnified with the poor throughout the country. There are tens of thousands of Americans in the big cities who are wearing shoes, perhaps even a stylishly cut suit or dress, and yet are hungry.”

Something else to note about this poverty is its catholic nature. Whites may despise Negroes, and Negroes in their turn spurn Puerto Ricans, and so on, but whether they like it or not, they are all in the same boat. Some may be affected worse than others, like the eight million aged poor, but the conditions of even the best off are deplorably low by any standards. They are all of them members of the working class—something which hardly needs stressing and which runs like a thread through the whole depressing picture.

We do not hear the argument so often nowadays that the poor are that way because they are lazy and enjoy living on the dole. Nevertheless, it seems to be sufficiently prevalent still in America for the author to deal with it at some length and to demolish it with withering, scornful logic. The crux of his reply is that the poor made the fatal error of being born to the wrong parents: —

“Once that mistake has been made, they could have been paragons of will and morality, but most of them would never have had a chance to get out of the other America.”

All sorts of notions get a knock on the head in this book. It is not so much that Mr. Harrington always makes strenuous efforts to demolish them, but that they just fall down under the weight of the evidence which he gives. One idea in particular is that automation and industrial expansion necessarily mean a better life for all. In fact, as he points out, some better paid workers (the middle class he calls them) have no doubt been able to improve their lot, but those lower down the scale, and even some of those further up the scale, have suffered a drop in their standards. For many this has meant a tumble into the ranks of the intensely poor.

Mr. Harrington is not a Socialist; his “solution” to the problem is “massive government action,” although he does not go into details and the futility of such a policy should be apparent from the rest of his book. Still, we will forgive him this because in all other respects he is clearly master of his subject and constantly reminds us of the most appalling thing about poverty. That is, the poverty which it begets in every other direction so that the whole of our lives become permeated with its loathsome culture.

Read this book. It is truly a devastating condemnation of Capitalism.