The Centre of the World: Communism and the Mind of China by Robert S. Elegant, Methuen, 42s. 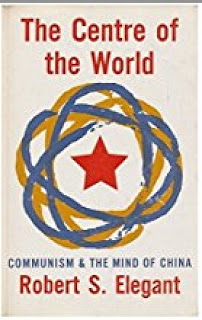 China is the latest recruit to world capitalism. The ruling-class there have taken over a whole bag of tricks from their fellow ruling-classes of the West and brought them up-to-date for the ruthless exploitation of their workers, both civilians and soldiers. They have used the technique of convincing the Chinese that the system of society there is communistic and that the government is a workers’ council acting for the workers. They have used expert propaganda to train their workers, or at any rate some of them, to be super-patriotic and ready to fight and die for the motherland; Chinese workers are now trained to believe that they are a kind of master race and that the rest of the world are barbarians; they have become super-employees, working fantastically long hours with many doing two jobs. School children and students, in addition to their classes, have to work long hours on farms or construction jobs.

China, the land where compromise was for centuries the order of the day, has now gone to extremes in almost everything imaginable. No more of those succulent meals, at least not for the working-class. Every place of employment has its canteen, including the communal farms, where small portions of rice and vegetable gruel are served, occasionally with a microscopic amount of meat. But money talks there as anywhere else, and for the wealthy there are black-market supplies at the usual high price. There is food rationing throughout China. The Chinese family, for centuries the closest- knit in the world possibly, has been broken-up, the children taken over by creches, the parents separated from each other and forced to sleep in dormitories near the job. All this they are being trained to view as more important than the family.

The agnostic Chinese have also been given a god—Mao-tse-tung; a bible—the collected works of Lenin, Stalin and Mao-tse-tung; priests, the omnipresent Communist Party cadres who supervise the workers politically not only on the job but in the street committees, trade union meetings, etc.; and an inquisition more gruelling than anything the Jesuits ever devised. Like the Christians in the West, they have a heaven that will never materialise; the Chinese pie-in-the-sky is the Socialist State towards which they are supposed to be going via this vale of tears. Tighten your belts a bit more, the Chinese workers are told, and you will be one step nearer the promised land. This exhortation seems to ring a bell here! But all this is for the workers only—the ruling-class do not need it.

Mr. Elegant in his book goes back to Confucious in his research on the unique Chinese conviction of superiority, as he terms it. He traces the history of China from 1600 A.D. and describes in detail the past decade, analysing such aspects as the Peoples’ Communes, Mao and the other leaders, the Sino-Soviet dispute the structure of both the Communist Party and the Peoples’ Republic. Here, in a fascinating portrait of a powerful new force in the world today is a blending of scholarship, journalism and political commentary. This reviewer was most impressed in face of the vast and detailed knowledge of the author but, despite the fact that Mr. Elegant is a newspaper correspondent and perhaps should be expected to know better, he does not understand what makes the society we all live in tick.

He doesn’t see the world as it is, divided into opposing groups, the workers and the ruling-class, whose interests are diametrically opposed. He sees the world divided into good people and bad people, good leaders and bad leaders. He sees two opposing systems of society, the free world of the West, and he is on their side and they are good; and the dark satanic world that lies behind the iron and bamboo curtains. That he regards as bad, and he hates their social system, which he mistakenly believes to be basically different from the capitalism of the West. This view colours his comments throughout the book, which can only be regarded as just one more addition to the muddle-headed spate of pro-capitalist propaganda with which we have to cope in the meagre columns of the Socialist Standard.

It is little wonder that non-Socialist readers who peruse books of this type are induced to loathe the very connotations of the word Socialism, not knowing that China is the latest example of a backward country, pitchforked by events into the maelstrom of a world of capitalism already developed, and using the quickest method of catching up with the others. It is not Socialism that they arc criticising but the growing-pains of this youthful capitalism.