Book Review: ‘The Meaning of Work’ 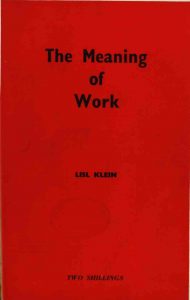 In her introduction the author says that, obviously, the first thing that matters about work is to have it. She adds that any discussion about being satisfied with one’s work has to presuppose that there are no fears of large-scale unemployment and it becomes nonsense if there are such fears; the second thing is that it must be adequately paid for. She goes on to say: “Nevertheless, I want to discuss the question of work as if basic security and basic living standards can be taken for granted.” She ignores, for the purposes of the argument, the problems of those who lose their jobs through automation.

In other words the author has, as one would expect, considered “the meaning of work” entirely within the context of capitalism. Nevertheless, she has some useful and interesting points to make and considers various aspects of the subject which are often ignored or over-simplified. In considering some problems, she suggests solutions in several cases which would be viable, or even “pay off” under capitalism in the 1960’s/1970’s. One instance is on the question of piecework, where she quotes a reason for its popularity with some workers which is not usually mentioned, when she says:

“Variation in speed can make piecework attractive. On many piecework jobs it is possible to bash away hard for a couple of hours and then take ten minutes off to have a cigarette or a chat without incurring the wrath of the foreman, because in quite a big way one is one’s own boss. This may even be possible on a conveyor belt. There have been experiments in letting groups of people decide the speed of their own belt, and they have usually varied it at different times of the day.”

A worker often develops his own way of doing a particular job. This may not always be the most efficient way of doing things for the whole organisation, but people cling to them because this is what makes it “their” job. She says “One of the dangers of work study is that it may determine methods too precisely and take away the opportunity to develop small tricks.”

She stresses the importance of workers being aware of the value of their work and knowing the part it plays in the organisation—or community — as a whole. She quotes the case of some women in a factory in Blackfriars who, during the war, were employed painting large quantities of metal D’s stamped out in metal. These were put on trays, sprayed with paint and dried, and two women had the job of turning them over so that they could be painted on the other side. Doing this job hour after hour, day after day, they had almost reached screaming point when the foreman explained that they were preparing drinking water identification for troops fighting in Normandy. This quite changed their outlook as they now felt they were doing something of “national importance” and they almost began to enjoy it.

On the subject of automation, she points out that a false picture is sometimes given by lumping all automatic processes together. While it is true that many are just “push button” stop and start jobs, others require control of complicated machinery. The job which was a craft one where a man did everything himself now may be done by a complicated piece of apparatus which he has to control; in many ways his role again resembles that of a craftsman. It often leads to breaking down of barriers and closer co-operation between different grades of workers to ensure efficient functioning of machinery. The operator has direct access to senior people, maintenance people, etc., and he feels a joint responsibility. The change to automation may lead to a freer exchange of views and, as a result, groups or “teams” develop spontaneously and the so-called unskilled operator is regarded as a responsible person.

There is an interesting section of Ergonomics, or “human engineering,” the latter description, as the author says, being rather unpopular here, although used extensively in the U.S. This is the study of “fitting the job to the worker.” As seems to happen in so many fields, this line of research first arose out of military needs. During the war technical advances produced machines, such as high-speed aircraft and radar devices, which presented their operators with tasks that could be so complex or exacting, or require such rapid action, that they were pretty well impossible to perform. It therefore became necessary to understand the human limitations of the operators and to take them into account. It was almost by accident, by some of the people engaged on this work in the Defence Department trickling out into civilian life, that industrial applications of the knowledge began to be worked on.

Often it is a case of making work more satisfactory (this does not necessarily mean—easier). By making it more satisfactory, it becomes more efficient. Sometimes this can be achieved simply by work rotation. I.B.M. carried out an experiment in one of their machine shops, where there were machine setters, operators whose job was to put pieces in the machine, start the machine, stop the machine and take the pieces out; inspectors who inspected the work and specialist departments for sharpening and maintaining the tools. In a fairly lengthy re-training programme, the operators were trained to set their own machines, sharpen their own tools and inspect their own work. The author sums up “This is not as simple as it sounds. . . .  It could only be done on a rising market because it left the firm with a lot of specialists to find work for. But this does open up big and interesting possibilities and far more experimenting of this kind could be done.”

A little later she says, “Technically there is probably very little which could not be done in the way of reorganising work so as to abolish those aspects of work which it might be demonstrated are harmful to the people doing them. . . . The question is whether anyone is prepared to afford it” (our emphasis).

Here seems a useful field of study in answer to those of our questioners who ask how, in a Socialist society, the dull and unsatisfying jobs will be coped with.

Finally, the pamphlet has, as one might expect, a section on “efficiency.” What is rather more surprising is that the final section is headed “Deliberate Inefficiency.” She states that all ergonomic and similar studies are undertaken with a view to improving the efficiency, rather than the well-being of the worker. His health and well-being are only considered as a means of obtaining greater efficiency. In her last paragraphs she makes a rather startling suggestion; startling, that is, under capitalism, when she writes: “One day some enterprising employer is going to do away with his sports ground, his welfare facilities, his flower-beds and his fringe benefits and use the money in deliberately ignoring some of the accepted precepts of efficiency—perhaps running his assembly line at a lower speed or allowing the girls in the typing pool to chat. The result might be surprising.”

We are often taken to task for not being willing to “give a blueprint” of life in a Socialist society and refusing to sketch in all the details. However, here is one thing of which we can assure our readers. In a Socialist society, work will be done at a speed most compatible with the well-being of the worker, and the “girls” will “chat” quite naturally. We would go even further—in a Socialist society we shall not need to do away with sports grounds or flowerbeds to achieve or “afford” this happy state of affairs!