Book Review: The Joys of Independence 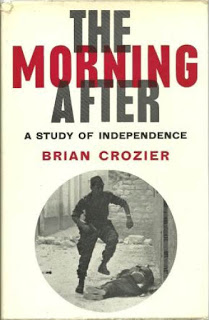 The Morning After by Brian Crozier (Methuen, 36s.).
The joys of becoming an independent country are, by and large, illusory for the mass of the peoples of the “liberated” countries and not worth the effort and sacrifice so often involved in achieving it. This is a theme that the S.P.G.B. has been plugging throughout its history. We did not need to wait till after the “subject peoples” had experienced the frustrations of independence to come to our conclusions, any more than we needed to wait for the emergence of forced labour camps or the signing of the Hitler-Stalin pact to prove that the Soviets were not going to introduce Socialism into Russia.
Of course, this attitude was regarded as cynical and brought us no popularity either among the people who were to be “liberated” or among the left-wing parties of the west who (except when they were in power, of course) were often in the van of the freedom movement. Nor shall we gain any popularity among the readers of this book if we point out that we could see it all coming.
Nevertheless, this book is a valuable one and worth reading. For Socialists it provides a considerable amount of evidence to support the case we make. For others it may prove something of an eye- opener.
Mr. Crozier has no difficulty in showing that in many of the countries that have thrown out the British or the French or the Dutch the lot of the average worker, far from being better than in Imperial days, is actually worse. He gives the example of Burma where four years after independence the average worker was earning £13 16s. per, not week, not even month, but year. Twelve years earlier, under British rule, the figure was £24 14s. Nothing to write home about, but the Burmese workers can hardly claim to have done very well out of the change for which they struggled. In Indonesia, a country with fantastic natural wealth, the author quotes President Sukarno’s own paper as admitting: “A city worker who only makes 6.50 Rupiah a day can never afford a litre of rice at 8 RP. He therefore cannot even support a family,” i.e., not even on rice-bowl standards. It must be comforting to a worker in Jakarta to watch his children going hungry and reflect that at least they have expelled the Dutch.
The author also has little difficulty in showing that on the freedom front most of these countries make as poor a showing as on the economic one. When one thinks of political opponents being tried in chains in the Courts of Ghana (where Nkrumah’s strong-arm man was able to send his wife on a spending spree to London to buy, among other things, a £3,000 gold bed) one is almost tempted to forget (as one should not) the quite recent atrocities of the British and French in places like Kenya or Algeria. The author does not mention an item which was quoted in this journal a year or two ago about trade unionists being imprisoned and flogged in the Pakistan of General Ayub Khan, whom he regards as one of the less evil of the rulers thrown up by independence, for the crime of striking for better working conditions. One wonders if these poor devils felt the lash any less painful because it was used on the orders of a fellow Pakistani and not of an alien Briton.
There is a tendency, and Mr. Crozier is not free from it, to suggest that dictatorship is really quite good for the emergent countries or at worst, a necessary evil. This is, of course, an insult to the workers of these countries who deserve their despots no more than the European workers of Hitlerite Germany or Franco Spain. But in general this book does a useful job in showing the futility of the nostrum of independence for the working class. Would that he showed some awareness of the need for a revolutionary change in the social scene in backward and advanced countries alike.
L. E. Weidberg