Book Review: Crime in our Time 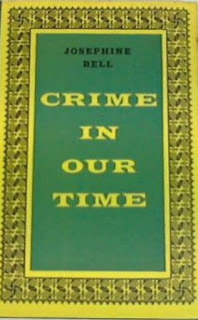 Crime in our Time, by Josephine Bell. (Nicholas Vane, 21s.)
Crime is a subject that never seems to lose its fascination; one wonders what some of the more sensational newspapers would do without it.
Always a major topic of interest, only a political upheaval or an outstanding sporting event can keep the latest wage snatch or a particularly nasty murder out of the headlines. Many of the Sunday newspapers, as well as certain periodicals, rely on recent crime, or on highly coloured articles which dramatise the crimes of the past. And as if reality were not enough, the cinema and the television screen are there to transport us to a dream world of crime, a dream world in which the criminal is caught with monotonous regularity. One can never understand why they don’t pack it up in the first reel.
At the other end of the scale, in the local papers, we find the weekly cavalcade of petty crimes. Largely unnoticed amongst the local news items and the announcements are all the dreary, and sometimes tragic, little affairs that fill the magistrates’ courts.
But underneath the sensationalism and the morbid curiosity lies a real and understandable concern with a problem that touches the lives of most people. Many workers such as nightwatchmen. bank workers or postmen are quite liable to be injured or even killed in some sort of raid. Other people may be the victims of gang fights, sexual assaults or other forms of violence. None of these people can be expected to view the subject with clinical detachment. Their fears and their demands for protection are understandable. Feelings run high and find expression in hysterical demands for more violent punishments for the criminal. This is the kind of demand that has become a regular feature of Conservative Party conferences; a demand for more flogging and hanging. These punishments will solve nothing and only serve to cloud the issue even further. Books and articles on the subject are endless, and they are read with avid interest.
The book under review, Crime In Our Time, by Josephine Bell, who is better known as a writer of detective novels, is an honest and unemotional attempt to review a complicated problem. Much painstaking research has gone into its preparation, and a lot of varied information is contained within its pages. This alone makes it of considerable use to people who are studying this subject. Beginning with an account of one day’s crime in London-twenty-four hours selected at random—it covers crime over the last 60 years and then surveys the criminal scene today. A great part of the book is occupied with facts and figures concerning the nature of those offences which the law knows as crimes —the diseases both physical and mental that can lead to violence and sexual abnormality and the processes of the law itself.
One aspect that is of interest to the Socialist is the growth or decline of different types of anti-social behaviour as the conditions within society change. In crime, as in the capitalist society of which it is just a part, one problem disappear only to give rise to new ones. Agricultural societies may give way to industrial, large towns may replace small, family groupings and loyalties may decline or disappear, but the basic problems of poverty and insecurity remain. This is where we must probe, if we’re to find the basic cause of crime in our time.
Les Dale