Book Review: The West Indies: What Next? 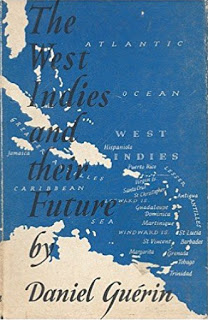 The West Indies and their Future by Daniel Guérin (Dennis Dobson.)

This book is a serious attempt to consider the West Indies history and their future from a left wing viewpoint coloured very strongly by Negro nationalism. Now this is a change from the usual run of travel books and “histories” produced by well-meaning English writers who pass rapidly through the Caribbean on a no doubt pleasant working holiday. But the book’s “left wing” angle (the words masses, plutocracy, and reactionary occur frequently) cannot excuse some basic defects.

Guérin states that he visited some of the islands in 1955, but the book was not published until 1961. There have been many constitutional and social changes in the West Indies since 1955: for instance, Guérin makes much of racial prejudice and singles out especially, the French islands and an oilfield in Trinidad. The behaviour of the white inhabitants of the French islands (known as Békés) is no doubt, even now, good for a sound beating from anyone whose ideas are not completely dominated by the doctrines of, say, the Navy League, circa 1910. Martinique and Guadeloupe are still very much French colonial possessions, and the outlook of their békés is probably no different from that of their counterparts in Algeria—small wonder that M. Guérin can enjoy himself at their expense. But to describe the behaviour of the békés as typical of social behaviour generally in the West Indies is like describing the behaviour and outlook of retired generals in Bournemouth and Cheltenham as being typical of the average British citizen. Rather, in the British islands at any rate, racial prejudice nowadays takes the form of Negro versus East Indian, or manifests itself in vague anti-white sentiments.

M. Guérin’s description of the segregation of workers in the Trinidad oilfields into whites (“with enormous material advantages”) and coloured (“who must do with a minimal wage”) both begs the question and is many years out of date. In the first place, the oil industry is highly technical and, until recently, the West Indies just could not provide men to fill certain skilled positions: hence the expatriates who had to be offered considerable inducements to live and work in the tropics. Secondly, oil companies, wishing to keep in with the Trinidad Government to ensure the continuation of the present, favourable, oil tax, have trained local men for senior posts with the companies. It is now common for coloured workers to occupy bungalows in the senior staff compounds and to rub shoulders with their white colleagues in the senior oilfield clubs on terms of social equality.

M. Guérin discusses some major problems of the West Indian (capitalist) economy—monoculture, the high cost of living, overpopulation, etc.—problems which have been described in greater detail if not with such “progressive” zeal by Parry and Sherlock in A Short History of the West Indies (incidentally, Parry and Sherlock’s book, although written from the “establishment” angle, is an entertaining and comprehensive source of knowledge for workers interested in the West Indies).

Immigration
Of course, these problems are mainly problems for the Capitalist class. The really pressing problem facing the West Indian worker (and his fellow-workers in other parts of the world) is not overpopulation, monoculture, high cost of living, etc., but the fact that he is a member of the working class. Needless to say, solving the West Indies’ worker’s problem by ending his wage-slavery has never featured in the programmes of the Capitalist economists and politicians who have propounded various “solutions” to the peculiar predicament the West Indian section of the Capitalist class is in.

Now that the steady stream of West Indian immigrants is being curbed by United Kingdom legislation, politicians in the West Indies fulminate against the British Government for barring the door to commonwealth citizens on the grounds of their colour. These same politicians conveniently forget that coloured commonwealth citizens from, say, Grenada and St. Vincent are forbidden to enter Trinidad to live and work (so for that matter are citizens of the United Kingdom) as, for example, labourers or typists. The larger West Indian islands have strict immigration laws preventing the smaller islands shipping their unemployed to them

M. Guérin was apparently unable to study ‘the emancipation movements” in British Guiana and Cuba, a pity because an up-to-date “ left-wing” account of recent Caribbean history can hardly be considered complete without reference to Castro’s regime. But recent developments in British Guiana are a good example of the wide difference between what a “left-wing” politician often says and what he does. Dr. Cheddi Jagan, the Chief Minister of British Guiana, has been long known as the leftist of left wing, and his frank admiration of Soviet Russia and Castro has been repudiated by other West Indian politicians, such as Trinidad’s Dr. Eric Williams. Dr. Jagan hinted at nationalising industries in British Guiana, which alarmed business organisations with capital invested in British Guiana and potential investors. To prevent withdrawal of capital, and subsequent unemployment. Dr. Jagan was recently obliged to state that he had no intention of nationalising any industries. During 1961 Dr. Jagan went on a begging tour of the United States and Canada in search of substantial loans to bolster his country’s economy and prevent the present level of unemployment getting any worse.

And what of the future? Here. M. Guérin becomes very pessimistic; one of the reasons for his pessimism is, without doubt, that most of the diverse peoples living in the West Indies have no real sense of “belonging,” from a class and a purely patriotic point of view.

Go to any village in the Yorkshire dales: the people living in that village are ordinary working folk, but what is bound to strike the visitor most forcibly is the atmosphere of “belonging.” The visitor will be a “foreigner” even if he has only come from Bradford, a few miles away, and the bearing, conversation, and relationships of the villagers will make it abundantly clear that they and their forebears have lived in the district for centuries; that they belong.