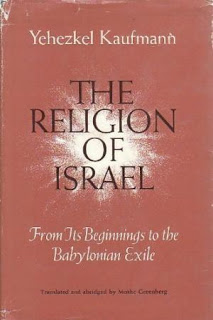 The Religion of Israel, by Yehezekel Kaufmann (translated by Moshe Greenberg.) Allen & Unwin, 42s.
This is an excellent book: not only the translation—which alone can make or mar any work, but also the abridgement of seven volumes.†  Despite this and the obvious drawbacks Dr. Greenberg has given us an eminently readable book. A must for biblical scholars and a mine of information for Socialists. Professor Kaufmann took the best part of thirty years to produce these seven volumes and in so doing has amassed a wealth of facts regarding the origins and the nature of Israelite religion—Judaism. Many of these facts are incorporated in this abridgement, which makes fascinating reading and one wonders at what was left out. This is the first time that any part of Professor Kaufmann’s major work on Judaism has been published in any other language but Hebrew.
For those concerned with Judaism as the first monotheistic religion from which sprang Christianity and Islam and the connecting links between Paganism, Pantheism, Polytheism, and Primitive Magic, there is a good argument in this book and much to cogitate over.
Socialists will value this book in much the same way as they do Fraser’s Golden Bough, and Darwin’s Origin of Species, as an explanation of mankind’s activities and of his earlier inability to understand natural phenomena, such as the rising and setting of the Sun, the waxing and waning of the Moon, storms, floods, and so on. Primitive Magic was early man’s way of endeavouring to deal with the things he did not understand, and as he became more sophisticated his superstitions hardened into religion. Pantheistic and polytheistic to start with and then Monotheistic, today we have variants all along the line, enough of them in fact to make the soup firms’ varieties look sick. In the bargain, organised religion in the early days of propertied society— somewhere in the Middle East—gave rise to science, which is today busy burying religion beneath a mountain of facts.
All of this has been brought about by man endeavouring to come to grips with the problems that confronted him. Homo Sapiens has solved most of his problems, and we are confident that he will continue to do so. This volume is good ammunition for debunking the God idea. Not that Professor Kaufmann wrote his volumes with that intention—he is a devout Jew—but then neither did Darwin!
Jon Keys
* GOD.