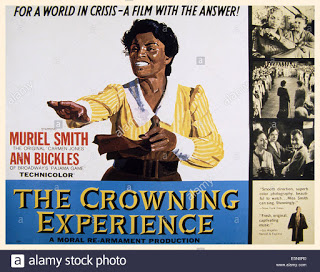 Verdict: A “must” for all those wishing to know just how not to solve the problems of society.

Very good colour and camera work. Music and lyrics fair to middling. Acting and presentation good in some parts, but in others, oh so awkward and stultified as to draw embarrassed titters even from a sympathetic audience.
And the plot? Well, when we tell you that The Crowning Experience is a Moral Re-Armament Production, maybe you can guess the rest. A lavishly produced book of the film assures us that it was inspired by the real life story of Mary McLeod Bethune, a Southern Negress of very humble beginnings who, it is said, founded a University in Mayesville, South Carolina, and became a special adviser to Presidents Hoover and Roosevelt.
Broadway singer Muriel Smith portrays the leading part of the good lady, here called Emma Tremaine. After starting the “Tremaine College,” she has trouble with a young graduate, Charlie, who becomes a “Professional Revolutionary” in the pay of the Communist Party, trying to work an outsized chip off his shoulder, acquired during childhood when his mother died of starvation. This leads to a first class row with Emma when he tries to form a “Cell” in Emma’s own college, and gets thrown off the campus for his trouble.
But everything comes right in the end. of course, because they all somehow find their way to an MRA conference on Mackinac Island and become “changed.” Even the stubborn Charlie (who has really gone along there to get his wife back) melts before the powerful appeal of the four absolute standards of honesty, purity, unselfishness and love. In a matter of minutes he has switched his worship from the God in the Kremlin to the one at Mackinac. Finally, there is a truly tear-jerking session with politicians and leading figures from various parts of the world confessing their past dishonesties and swearing to uphold and apply the principles of MRA in the future.
The political simpleton will find much in this film to encourage him in his ignorance, Apart from the scientifically quite untenable “God” idea there is the fatuous and futile notion that the MRA “Absolutes” will give us the peaceful and happy world which we all so desperately want.
Of course, it is desirable to be honest, to harbour no hatred or ill-feeling, and to be free from fear. No doubt we have all felt the strain imposed by having to cheat and lie at some time or other, and no one but a madman really approves of it. Again, how nice it would be if the statesmen were to be absolutely honest with each other—a sort of “cards on the table” policy. Then why aren’t they? What is it that makes them hold secrets, even from those whom they proclaim as allies? In fact, why do statesmen exist at all? Just whose interests do they represent?
It is only in posing and answering such questions as these that we can hope to achieve a satisfactory explanation of the bloodshed, suspicion and misery in which modern society abounds.
The Crowning Experience tells us merely that such problems exist. For the most part, it is a study in religious emotionalism, and relies on tautology and the usual sweeping claims in support of its “case.”
Eddie Critchfield