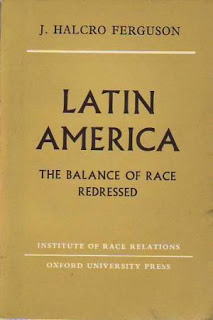 With the exception of The Times and The Economist the only British newspaper that regularly covers Latin American affairs is The Observer, which has in Halcro Ferguson a highly informed student of what is going on “south of the border.” His first book is therefore a welcome addition to the limited literature available on the racial aspect of that part of the world.

It is regrettable that the author makes no attempt to define his meaning of the term race. It is far too “loaded” a word to leave to the reader’s personal interpretation. Fortunately, there is nothing in present day Latin America to compare with the specific discrimination on grounds of colour to be found in the Southern States of America or the Republic of South Africa. It would be a mistake, however, to think this is due to some kind of moral superiority. Discrimination and indignity have many forms. From Mexico down to Paraguay the Spanish speaking descendants of the conquistadors have exerted a repressive social, religious and linguistic domination over their Indian subjects whose pre-Colombian culture was by no means inferior to that of their conquerors.

Mr. Ferguson likens the break-away of the Spanish colonies under the leadership of Bolivar and San Martin to the current White-Settler and “Colon” quarrels with the home country, although as he himself shows the social gap between the élite and the masses was not a principle of racial superiority. What it does mean is that as the countries of Central and South America undergo their national bourgeois revolutions we are likely to witness the rise of the Indian majority as a key political factor with the subsidiary demand for literacy and equal rights of language. A situation not unlike India once the English no longer held sway.

We must register a point of disagreement. Despite the fact that numerically the peasants were preponderant in both Mexico of 1910 and Russia of 1917 it is an error to equate the respective struggles of that period. In the words of Rudolf Sprenger, “The Russian Revolution was a bourgeois revolution without the bourgeoisie. Leadership: the intellectuals. Weapon of attack: the proletariat. Mass-basis: the peasantry.” In Mexico’s case it was not a question of a fundamental change in the social basis of society, which is what we understand by the word revolution. Rather was it one of the last of the great peasant revolts so tragically doomed to failure by the inexorable laws of social development.