The Waste Makers by Vance Packard (Longmans, 21s.)
Capitalism has solved the problem of production. The system of capitalism, 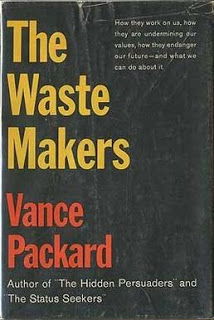 which already exists over much of the world and is rapidly capturing the rest, has given birth to sufficient productive potential to satisfy all the reasonable demands of mankind. All that now remains to be done is to bring in a system in which these potentialities can be realised to the full. For this is where capitalism has failed.
Mr. Vance Packard’s new book The Waste Makers (Longmans, 21s.) throws lots of useful light on this failure and shows how some American capitalists try to create new markets and increase their profits. Of course, like racegoers betting on the Tote, they can’t all win: but they all try. Sometimes an arms race will provide them with markets, and the American upper class realises how important the cold war is in staving off a slump. As Mr. Packard says:

Financial columnist Sylvia Porter noted that every time there has been a suggestion of a major cut in Pentagon spending “the stock market has gone into a tail spin.” On the other hand, in May, 1960, when the Russian capture of the U-2 plane was followed by the collapse of the summit meeting, Wall Street stock-market prices advanced during seven successive days.

But even the unprecedented spending on arms cannot solve their problems. Mr. Packard says that “during the postwar years, the amount of goods and services that one man can turn out in an hour has increased by about 3 per cent, every year.” What effect this had upon human fortunes? One is that consumer goods are deliberately made worse, so that they will wear out sooner, and therefore have to be replaced. Marketing Consultant Victor Lebow made a plea for “forced consumption” in the Journal of Retailing in the mid-fifties: “We need things consumed, burned up, worn out, replaced and discarded at an ever increasing late.” Packard quotes General Electric decisions to “change” (without publicity!) the life of a 200-watt bulb lamp from 1,000 hours to 750 hours, and the life of the 2,330 lamp from 300 to 200 hours. The Vice-President of the Chrysler car company is quoted as saying the quality of cars “is not as good as 10 years ago.” A guided-missile expert is quoted as pointing out that there was no technological reason why television sets could not be built to last for eight years without repair; while (according to Packard’s carefully-marshalled evidence) the quality of TV sets was in fact deteriorating.
Another waste-making device is regular changes of style, so that with enormous advertising campaigns plugging the new style, everyone with an older car or refrigerator or set of china is made to feel out of date, and has to buy the newer style to keep up with the Joneses. In this connection the board chairman of the powerful Whirlpool Corporation told engineers at a washing-machine technical conference that “an engineer’s principal purpose as an engineer is to create obsolescence.”
Yet a further means of pushing goods is the never-never. Consume now, pay later. The result is that many American families now have a load of unpaid debts. A survey by insurance companies, says Packard, showed that the average American family was about three months from bankruptcy and for millions of families the disaster was much closer than that. One “solution” is for the wife—including wives with young children—to go out to work as well as the husband. Investigators for U.S. News & World Report found that Americans’ biggest worry was “money,” and “making ends meet.”

A minister in Cedar Rapids. Iowa, reported that “in 75 per cent of the cases where people come to me with marital problems, money enters in.” And a doctor in the same city said many of his patients’ aches and pains were caused by money problems. “You can buy a car on time and stretch the payments over thirty months, and you’ve got a chronic pain. You really have.”

And all this feverish drive takes place at a time when, according to an estimate by ACTION, the American national organization for civic improvement, it would cost about one hundred billion dollars to wipe out United States slums, and when, as Packard says, there are millions of families “unquestionably ill-fed. ill-clothed, ill-housed.”
This is a book which you should get hold of and read. You may disagree with the author’s conclusions, hut the whole book is thought-provoking.
Alwyn Edgar