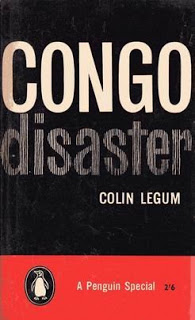 Congo Disaster by Colin Legum, (Penguin Books 2/6)
For a very long time, the natives of what was the Belgian Congo have been an ill used race of men. The Arab slavers look, according to one estimate, 30 million of them. The agents of Leopold II were little better. The king said. “The slave trade . . . is a plague spot that every friend of civilisation would desire to see disappear . . . ” but in the event he imposed what Legum calls “. . . forced labour on a scale unknown in modern times until the advent of Hitler”.
It is little wonder that the Congolese have not forgotten and that their politics were so conditioned by the memories of the colonial period. Strong nationalist parties grew up and at the Brussels Conference in January last year they made their surprise demand for independence within six months. Just as surprisingly, the Belgians agreed without a struggle. There was, apparently, to be no repetition of Cyprus or Algeria. In fact the Congo, as Mr. Legum tells us, had already ceased to be a “Blue Chip” colony: the fall in world prices of copper and other primary commodities had seen to that.
The climb-down in Brussels was followed by the elections in June, in which the nationalists swept the board. But no section of them had a decisive lead and the ring was cleared for the Unitarians (Lumumba,  Gizenga) and the federalists (Kasa-Vubu, Tshombe) to fight it out. The rest of the story is yesterday’s news.
Mr. Legum indicts the Belgians, reveals Tshombe as a vicious fop, disposes of the notion that Lumumba was baking a troubled pie for Moscow to stick its thumbs into.
Although criticising the United Nations, he also gives them a lot of credit: “If there is neither chaos nor anarchy today it is solely due to the U.N. operations.”
Congo Disaster has been overtaken by events (it  was published before the Lumumba murder) so that its introduction is, in fact, a kind of postscript Mr. Legum’s suggested remedies are essential old hat and. not surprisingly, ignore the commercial nature of society which is the real cause of the strife in the Congo.
But it is a typical Penguin—easy to read, easy to carry, and a useful refresher course on the history, economics and politics of one of the world’s latest eruptions
Ivan