The Soul of Man under Socialism by Oscar Wilde; included in “Essays and 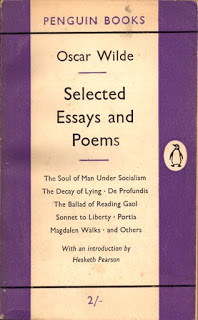 Poems of Oscar Wilde“. Penguin Books 2s. 6d.
Oscar Wilde died before the Socialist Party had been founded. It would therefore be a barren exercise at this stage to debate whether Wilde was a Socialist in the exact meaning of that term. What is beyond doubt is that there is in this essay much that the Socialist will agree with. and much more that could form the basis of rewarding discussion. There is no need to be off by the title: by “soul” Wilde clearly meant nothing more than mind—his choice of words has no religious implications.
It is true that part of the essay has little to do with Socialism in any economic sense—nearly half of it is taken up by a diatribe against any attempt at dictation to the artist, whether by government or public opinion. But when Wilde keeps to what is directly relevant, it is a joy to read his sparkling prose, and to see how he hammers his points home.
What of the do-gooders, for example, who try to alleviate the ills of society by well-meaning charity? Wilde writes:

Their remedies do not cure the disease; they merely prolong it. Indeed, their remedies are part of the disease. They try to solve the problem of poverty, for instance, by keeping the poor alive; or, in the case of a very advanced school, by amusing the poor. But this is not a solution: it is an aggravation of the difficulty. The proper aim is to try and reconstruct society on such a basis that poverty will be impossible . . . It is immoral to use private property in order to alleviate the horrible evils that result from the institution of private property. It is both immoral and unfair.

Of the poor, Wilde says:

Why should they be grateful for the crumbs that fall from the rich man’s table? They should be seated at the board, and are beginning to know it.

As for those of the workers who accept their conditions, who have “made private terms with the enemy”:

I can quite understand a man accepting laws that protect private property, and admit of its accumulation, as long as he himself is able under those conditions to realise some form of beautiful and intellectual life. But it is almost incredible to me how a man whose life is marred and made hideous by such laws can possibly acquiesce in their continuance.

Wilde would have nothing to do with state capitalism that is now often passed off as “Socialism”:

If the Socialism is authoritarian; if there are Governments armed with economic power as they are now with political power; if, in a word, we are to have Industrial tyrannies, then the last state of man will be worse than the first.

He saw that a revolutionary change in the economic basis of society was necessary, and that this would have inevitable repercussions in the social superstructure:

When private property is abolished there will be no necessity for crime, no demand for it; it will cease to exist . . . Though a crime may not be against property, it may spring from the misery and rage and depression produced by our wrong system of property-holding, and so, when that system is abolished, will disappear . . . Crime will either cease to exist, or, if it occurs, will be treated by physicians as a very distressing form of dementia, to be cured by care and kindness.

Of the future economic organisation of society, Wilde remarks: “The community by means of organisation of machinery will supply the useful things, and . . . the beautiful things will be made by the individual.” By individualism Wilde means the full development of man’s personality, the possibility of which has been crushed by the institution of private property. The whole essay could be summed up in this paragraph from it:

With the abolition of private property, then, we shall have true, beautiful, healthy individualism. Nobody will waste his life in accumulating things, and the symbols for things. One will live. To live is the rarest thing in the world. Most people exist, that is all.

This essay is a mine in which only half an hour’s reading will reveal many Socialist gems.
Alwyn Edgar