Wembley
Wembley Branch has continued with its series of very interesting historical lectures, given by members of the Branch. These talks have stimulated good discussion and have been advertised in the local press. Current details are given elsewhere in this issue. Canvassing of the Socialist Standard is a regular feature of the Branch activity and some very worthwhile results have been obtained. At present, the order stands at 18 dozen copies per month, and it is hoped to expand sales gradually in the future.

The efforts of the Branch press correspondent have met with some gratifying success. The local paper has published write-ups of our meetings and lectures and, just recently, featured in full a letter on the question of rents and housing. The comrades were very encouraged to see this, particularly as the Editor took the trouble to inform his readers, in a footnote, that we were not connected with the Labour Party.

On December 17th, Branch comrades are running a Social at Ealing Park Tavern. South Ealing Road, W.5. Tickets are available from the Branch Secretary at 3s. 6d. each and the usual arrangements are in hand, including a band, and free refreshments. We look forward to a very happy get-together.

British Columbia
Last month under the title, “News from Canada,” we stated that the application of the Victoria Branch of the Socialist Party of Canada for an open-air speaking spot in a park has been refused. It appears that the local council have evidently relented, for we now learn that the Branch is holding outdoor meetings in Beacon Hill Park.

We have received some cuttings from Victoria local papers, with pictures of our comrades in action, and a statement that 200 attended their first meeting–including active hecklers.

One local paper had this to say

The inauguration of Victoria city’s own Hyde Park proved itself a great success Sunday afternoon. A very respectable crowd in both size, interest and behaviour braved rain, mud and buzzing model planes to listen to the ideas of the Socialist Party of Canada, the thoughts of a philosopher’s philosopher, and an appeal to give more blood.

These meetings should give a well deserved fillip to the efforts of our energetic comrades in Victoria.

Coventry
Our comrades in Coventry aie organising a Group. Will members and sympathisers in the area contact P. Boylan at 71, Ford Street. Coventry. Already the nucleus of members has accomplished a lot, and with the added enthusiasm from other comrades, it will be possible to pave the way to the formation of the “Coventry Branch.”

Swansea
The newly formed Swansea Branch have held a public meeting in the Central Library; we will report on it next month. 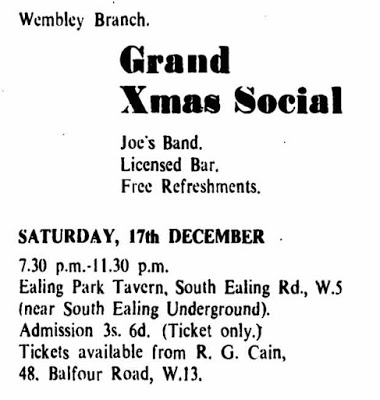