‘Adventures With the Missing Link’, by Raymond Dart (Hamish Hamilton) 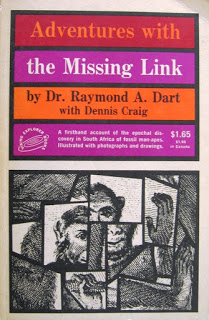 This book can be confidently recommended to readers of the Socialist Standard and all those interested in human evolution. Couched in a readable narrative style, partly because the story is largely autobiographical, it recounts thirty years’ research in South Africa.

It starts with the accidental discovery in 1924, of an ape-like skull, more human than any living ape or ape fossil known. Professor Dart considered his discovery fundamental—a real missing link between ape and man—and he named it Southern Ape. As is usual, this conflicted with established ideas, and twenty years elapsed before confirmation came from fresh finds in another South African mine.

Perhaps the most interesting parts of the book are Dart’s theoretical conclusions. Basing his views on knowledge of the terrain he has proved that Australopithecus killed his prey with bone weapons made into knives and clubs, antelope jaw bones, and giraffe leg bones. Skulls of powerful and large animals were smashed in by deadly blows, sometimes from the front, and no ape can do this. Also, quite unlike apes, on occasions they killed and ate each other.

He therefore presents a powerful case for the Bone culture age of Ape Man, thus filling in many of the gaps previously existing in known human history.

The story of human descent will probably never be really complete—certainly never complete enough to convince those who can’t do without a Creator—but Professor Dart’s contribution has permanently enriched it.