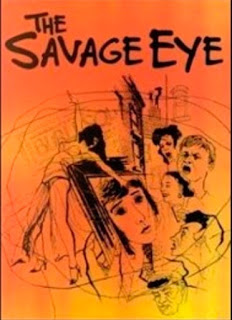 THE SAVAGE EYE, at present showing at the Curzon, is something of an emotional block-buster. Staggering out into the neon lighting, the dazed cinema-goer finds himself asking, “Is life really as dreadful as this, are people usually so hopeless and despairing?” or worse still, “Am I one of them?”.
Certainly the eye is savage enough giving a conducted tour of present-day society as seen by a bitter, disillusioned and dejected divorcee. Finding herself in a spiritual vacuum, she wanders about the city, draws her alimony cheque regularly, and spends much of her boredom increasing her disgust at the behaviour of human beings. Sourly she views the world at large from the pavement, and a singularly depressing view it is. Bad debts at the dog tracks, screams for blood at wrestling matches, vicious brawls in pubs. Men looking for women, women looking for men. and fat ladies pedalling wildly on stationary bicycles in a beauty parlour. Candid shots of gaping mouths, sagging waists and false smiles. Yet beneath their phony, gilt-edged pretensions, people struggling for recognition, love and affection. Even in one of the most pitiful and truly horrific scenes of the film struggling for their health at a faith healing ceremony (“Dear God, it’s her liver. Move along friend and pray awhile.”) During all of this she conducts a cynical and at times slightly pretentious dialogue with a resonant manly voice that identifies itself as “Your inner self, your angel,” and the unhappy wanderer is finally persuaded to face reality and come to terms with the people she despises so much.
The film shows you nothing new. People are seen doing the things you know that they do, living the life that you know they live. But it does make clear the fact that society is made up of people, and that people within modern society need more than new flats, health insurance and hair driers to make them feel that life is worth living. They need to belong, to feel that they are doing something considered worthwhile to the community, to give and to receive. In a society such as ours it is quite obvious that these needs are for the greater part unrealised. Our world is dominated by fear, hatred and confusion, where cash, profit and ‘‘What’s in it for me?” are so often the criteria for doing anything. When half the population do not even have their basic requirements of food, clothing and shelter met, much less their emotional needs, how can they find personal satisfaction and harmony in their every-day lives? To retain a sense of ordinary humane values requires a conscious effort. Divorced from emotional security at home, in spite of vast housing estates and modern gadgets: alienated from pride at work, for all the new machinery: still there is little sense of achievement and pleasure.
This is all shown clearly, but the film offers no solution to the problems. Surely to reorganise society on a basis of common humanity and the social considerations of the well-being of all human beings is not such a difficult task. While Socialists may feel that The Savage Eye does not look far enough, it is none the less well worth seeing for it does extend an invitation to its audience to (misquoting the faith healer) “Move along friend and think a while.”
J. H.