Even in these days of scientific research, men cling to some very peculiar 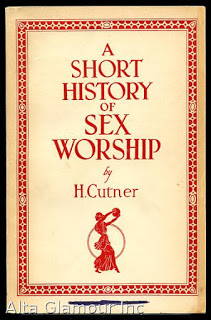 superstitions. Some of the beliefs and superstitions held by man in his less enlightened past now appear to be downright ridiculous. Worship flows from superstition and Mr. H. Cutner in his book,“A Short History of Sex-Worship” portrays for us some of the queer ideas, customs and forms of worship of bygone days.
For primitive man fertility was something to worship. Good crops and plentiful cattle meant an adequate food supply. Large families ensured many hands to sow and till and hunt and work. Famine and barrenness were things to dread. Small wonder that in his imaginings he conceived gods of fertility who had power to make or mar his existence. Such gods would need to receive sacrifices and to be worshipped in order to induce them to cast a favourable eye in the direction of the worshipper.
From such superstitions arose many religious cults and practices. The sun and the seasons came in for a good share of worship; so also did the human sex organs. This worship of man’s generative powers is known as phallic worship and has played a great part in the ideas and practices of many religious cults.
Mr. Cutner traces the history of phallic worship from earliest times, through the days of ancient Egypt, biblical times, the ancient Far East, Rome and India and shows us how many of the old-time phallic practices have passed into modem religions in a disguised form. He quotes from many sources but we think that the ideas of some of the authorities are a little far-fetched. It appears to us that some of them have seen a phallus around every corner and have mistaken everything that even remotely resembles a male or female sex organ for a sex symbol. We get the impression that some completely irrelevant factors have been viewed solely from an angle suitable to the investigator’s foregone conclusions.
Nevertheless, Mr. Cutner, in presenting this material to us in a concise and easily readable form, has done good work. Collected into his 215 pages is more useful material on the subject than is usually found in far weightier tomes.
The book is published by Watts and Co. in paper cover for 2s. 6d. and is available to members of the S.P.G.B. from Head Office book department. 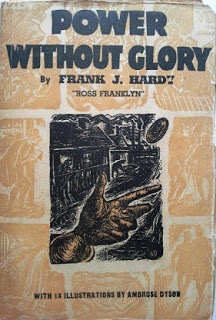 From Australia comes a novel by a certain Frank J. Hardy entitled “Power without Glory.” The theme of the story is expressed in a quotation from Charles Kingsley that precedes part one of the book,

“A working man who deserts his own class, tries to get on and rise above it, enters into a lie.”
The story opens in 1890 and leads us through a series of Australian political events up to very recent years. It tells of a young working class man who, by unscrupulous and callous methods, rises out of his class to become a millionaire. Our knowledge of Australian political history is not sufficiently detailed for us to distinguish if all the political events narrated are completely factual. The names of a number of prominent and well-known Australian politicians appear in the story with very little said to their credit.
The author tells us in his concluding note that his book, and others to follow, will not advocate the class struggle but will recognise its existence; that Capitalism, having served its purpose, is convulsively passing, to be replaced by a higher social order. Socialism. Mr. Hardy’s sympathies obviously lie with the Australian communists.
The book is illustrated but not well produced having a paper cover and poor quality print, which leads us to suppose that the author had some difficulty in finding a publisher.

We referred recently to books by Jack London and one by Irving Stone. We have

recently read Irving Stone’s story of Jack London entitled, “Sailor on Horse Back.” This is an earlier book of Mr. Stone’s and the style is not so mature as in “Darrow for the Defence.”

Jack London was undoubtedly a sincere, well loved and exceptional man. An illegitimate child, reared in poverty, he became a news-boy, a pirate, a laundry worker, a seal hunter, a tramp, a gold prospector, a lecturer, a farmer and, after many other things, one of the world’s foremost novelists and short story writers. As a writer he earned fabulous sums, every penny of which, Mr. Stone tells us, was mortgaged before London received it because of his super-generosity and harebrained schemes to build boats, houses and farms.
Jack London was called a socialist. Some of his writings, such as his small booklet, “The Strength of the Strong” are masterpieces of educational propaganda dressed in story form. We would classify him as a “Rebel Labourite ” but much of his writing was useful in helping workers to an appreciation of their class status in capitalist society. His life was a series of sensations culminating in suicide in November, 1916. The story of his life makes interesting reading.
W. Waters