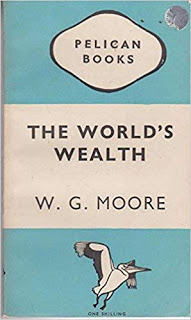 The World’s Wealth,” by W. G. Moore, published by Penguin Books at 1s. 6d., is a worthwhile ‘‘buy,” containing in a handy, compact form much useful information about the world’s material resources, as they actually exist at present, and as they are capable of development in the future. The author covers a vast amount of ground and the book naturally suffers from his effort to cram as much information as he possibly can into the short space of 250 pages. All attempts at compression can only succeed at the expense of the less important details and in this case pruning has had to be ruthless. Nevertheless, it can be said that in “The World’s Wealth” the author has succeeded in producing a summary that is most useful and which, at the same time, has been clearly and interestingly written.

The plan of the book is straightforward, little space being wasted on non-essentials. After a short introduction, the author proceeds immediately to examine the resources of the earth, dealing with them in separate, self-contained groups. Several chapters are devoted to the food requirements of mankind—what foods are eaten, where they are eaten, and their chief sources of supply. In similar manner he deals with man’s requirements in the way of drink and clothing. Further chapters deal with trees and their various products, sources of power, metals and other minerals, and transport. In a special chapter he traces the development of industry throughout the world from the time when Great Britain was its “workshop” to the present period of dominance by the United States. He comments also upon the ever-growing importance of Soviet Russia, and the book as a whole strikingly illustrates the preponderance of these two powers within capitalism today, and for some time to come.

The last chapter comes as something of a disappointment, though it is fortunately short. In it. the author sums up briefly what has already been said, commenting upon the wide divergences between the standards of living of the various peoples’ of the world, and condemning in particular imperialism and its effects upon the conditions of the subject peoples exploited under it. At the same time he attempts to answer the inevitable question of how these resources of the earth can best be used for the full benefit of its inhabitants. His remedy does not appear to be a very effective one, nor does he state it with much conviction. After remarking, rather piously, that

“It appears to be now generally agreed that such maldistribution of the world’s wealth as we have briefly reviewed must not be permitted in the post-war world, that acute shortage of the essential commodities of life must not co-exist with the improvident wastage and destruction of resources caused by an ill-adjusted world economy, that widespread poverty and hunger must not remain when greater riches than the earth has yet known await exploitation.”

he can only express the hope that

“. . . if there emerges from this situation the general recognition that it is wrong, and the determination that it shall be repaired, then soon, and for the first time in world history, the terms ‘peace’ and ‘plenty’ may become synonymous for every member of the human race.”

A very nice sentiment, no doubt, even with its “if” and its “may,” but it does not get us very far. Mr. Moore ends his book at this point, leaving many things unsaid, which is unfortunate to say the least. We would have liked to have heard more from him, and in more precise terms. This being impossible, we just recommend the book (the last chapter excepted), as a very useful source of “ background knowledge ” of present-day capitalist production and trade.
Stan Hampson