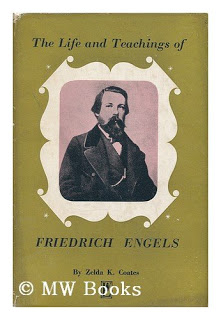 In a revised edition of “The Life and Teachings of Friedrich Engels” (published in 1945 by Lawrence & Wishart, 100 pages, 4s.), Zelda K. Coates quotes Engels in support of Russia’s economy and institutions. She approvingly quotes from Engels’ “Origin of the Family,” wherein is shown the development of woman from the equality of early communal society to that of her modern legal status of a monetarily assessed “chattel,” and where he prophesied that: —

“With the transformation of the means of production into collective property, wage labour will also disappear and with it the necessity for a certain statistically ascertainable number of women to surrender for money ” (p. 91, Kerr Edition).

The view of Engels was that with the end of the wages system, which typifies capitalism everywhere, marriages based on property and money would give way to sex unions based solely on mutual affection. Believing that Socialism has been established in Russia, Coates declares:—

“It is certainly no accident that this [mutual love as the only tie] has been attained almost completely and in actual fact and not merely in theory in the U.S.S.R.—the first really Socialist country, the national economy of which is based on a social collectivist system ” (p. 77).

The facts easily dispose of this assumption. Divorce, for instance, is only for those who have money in Russia, where legal costs make it prohibitive for most of the lower-paid workers. Russia’s easy divorce proceedings were ended recently by decree, as was legal abortion, while money grants and medals are offered as an inducement to women to raise large families. Furthermore, the likelihood of those in the large income and privileged stratum to wed in their own circle rather than with the lower-paid wage-labourers is too obvious to be stressed. Coates advances the usual case that Russia, under Lenin, established the “dictatorship of the proletariat,” but significantly adds that the peasantry have now attained political equality with the workers and, while not denying different modes of life and earnings of different “sections” of Soviet society, she says : —

“In general the difference between the early Soviet Constitutions and the Stalin Constitution of 1936 reflects the progress of the U.S.S.R. towards a completely class-less society ” (p. 88).

The logic of which is that Russia’s “class-less” society now ceases to need the dictatorship of the proletariat, there being no other class to dictate to. Before the phrase therefore sinks again into its intended oblivion, from which it was dragged by the “communists,” it would be interesting to consider its origin and meaning. It occurs in the early views of Marx and Engels in the epoch of violent capitalist revolutions, where the newly formed political organisations of the wage-workers of Europe (often in a minority compared with the peasantry) could, thought Marx, lead a government over the feudalists and early capitalists—the revolutionary dictatorship of the proletariat. Nor was armed force excluded, as witness Marx’s “Address to the Communist League,” 1850, in which Marx advised the workers to organise on military lines while yet emphasising that “the proletariat must see to it that no worker shall be deprived of his suffrage by the trickery of the Local Authorities or Government commissioners.” In his “Critique of the Gotha Programme” (1875), Marx deals with some proposals of Lassalle and makes the point that the proletarian dictatorship is the transition stage to communism. Arguing a like case, Lenin and his party —the Bolsheviks—won support in 1917 from the land-hungry peasantry and war-weary soldiers of Russia for the slogan of peace, land and bread. Czardom abolished, the “communists” created a state apparatus in the name of the dictatorship of the proletariat, which, now under Stalin, acts ruthlessly to any political opposition. But to return to Marx’s “Critique,” which Lenin publicised so much. Marx envisaged a lower and higher phase of communism, first the transitional stage of inequality, based on the amount of each individual’s labour, for which he receives a certificate from society, drawing its equal in labour terms from the social stock of the means of consumption, a society where “everyone is only a worker like everyone else.” With the development of the means of production and the individual the stage is reached where society can say “From each according to his ability to each according to his need.” The state, as such, once needed by the proletariat to hold down its adversaries, “ceases to exist.” The “communists” revised Marx’s lower and higher phases as “socialism” and “communism” respectively, and proclaimed that socialism, i.e., the lower phase of communism, had been set up in Russia. Since then, the rise of Russia’s rouble millionaires, priests with substantial fortunes to invest, the charging of education fees, banking, inheritance, national debt, etc., and a huge armed state, that refuses, in Engels words, to “wither away,” must provide a first-class headache for the most ingenious “communist” apologist trying to square Marx’s transitional period with Russia’s economy. The proof of the pudding is in the eating, for the march of social history shows that backward countries, whatever their political set-up, cannot go ahead to a class-less, moneyless society, especially as an isolated unit.
Marx, with this obviously in mind, wrote in his preface to “Capital” that:—

“Even when a society has got upon the right track for the discovery of the natural laws of its movement—it can neither clear by bold leaps, nor remove by legal enactments, the obstacles offered by the successive phases of its normal development, but it can shorten and lessen the birth pangs.”

Coates book gives no indication of the altered views of the later Engels; and a serious omission in this respect is Engels’ preface to Marx’s “Class Struggles in France,” one of the last things he wrote, revising his earlier opinions on insurrection and favouring the use of the franchise.
In this preface, written in 1895, Engels first refers to the views held by Marx and himself in 1848:—

“History has proved us, and all who thought like us, wrong. It has made it clear that the state of economic development on the Continent at that time was not, by a long way, ripe for the removal of capitalist production. . . .”

Engels then refers to the period of the Paris Commune, 1871, and writes: “. . . once again, twenty years after the time described in this work of ours, it was proved how impossible, even then, was this rule of the working class ” (p. 19).
In his 1895 Preface, Engels goes on to extol the growth of the German Social Democracy; he was spared the knowledge of its later reformist development. “. . .  the bourgeoisie and the government came to be much more afraid of the legal than of the illegal action of the Workers’ Party, of the results of elections than of those of rebellion ” (p. 23).
He had remarked a little earlier (Page 22) that “the franchise has been, in the words of the French Marxist programme . . . transformed . . . from a means of deception, which it was heretofore, into an instrument of emancipation.”
Engels describes armed revolts, street fighting and the barricades as obsolete. The soldiers see, not the people behind the revolts, but agitators, rebels and plunderers; on the other hand he lists the new weapons and training of the state military forces. The workers of the “atomic age” can now add more to Engels’ list, and thus reinforce Engels’ case of the hopelessness of insurrection in ending capitalism.
Engels, as the faithful collaborator of Marx, helped to bring to the working class the epoch-making work “Capital.” Its analysis of capitalist society describes the main features as commodity production, wage labour, surplus value and money. It follows, therefore, that Marxists must perforce describe Russia as a capitalist country, even though the Russian State directs and controls the whole economy, and where capital in the main is nationalised. Notwithstanding those who, like Coates, point to nationalisation as the substance of socialism, socialists agree with Engels, who, in his “Anti-Dühring,” wrote; —

“The modern stale, whatever its form, is an essentially capitalist machine; it is the state of the capitalists. The more productive forces it takes over the more it becomes the real collective body of all the capitalists. The workers remain wage earners, proletarians. The capitalist relationship is not abolished, it is rather pushed to an extreme. State ownership of the productive forces is not the solution of the conflict, but it contains within itself the formal means, the handle to the solution.” (Martin Lawrence Edition, p. 313.)

The challenging stand of the S.P.G.B., with its companion parties abroad, in that we alone stand for the abolition of capitalism and its wage system, is firmly upheld by political history and endorsed by the matured opinions of Engels and Marx.
Engels recognised that modern developed capitalism must cede, for inherent social reasons, the legal means of revolution to the workers. The duty of the socialists is to see that the vote is used not for reforming capitalism, but to abolish the relationship of capitalist and wage worker and establish not state capitalism, but common ownership of the means of life.
Frank Dawe