Parliament, Traitors and Beer
“Vote—What For” (Freedom Press, 2d.), by E. Malatesta, is an adaptation from a work by that author. It is the familiar Anarchist attack on parliamentary methods and government presented in the form of a discussion between two workers, George and Jack, over a glass of beer. George, supporter of parliamentary methods and of the Labour Party, puts up a defence which is demolished by Jack, the Anarchist. The demolition’ is rapid. Perhaps it is because the leaflet is only fifteen pages. The vote, says Jack, is a fraud: those elected further their own interests except at election times, when they make fulsome promises to the gullible workers. George, unshaken, replies that we should elect workers, and then we should not be fooled. In reply to this the Anarchist makes two points: one, a majority in Parliament would be a ‘”paradise,” but only for the “elected”: and two—but let Jack speak for himself: “The rich are always in power. Just imagine a poor worker, perhaps with an ill wife and four kids, and you [that is, hard-hearted George] tell him to risk his job and get thrown out of’ his house to starve; just to give his vote to a candidate his master doesn’t like.” From which one gathers that Anarchist Jack’s indignation is righteously aroused at the suggestion that the worker should exercise his vote because such action would bring in the bailiffs and impose starvation on an ill wife and four hungry kids and all. Does E. Malatesta (or his adaptor) mean this? It is difficult to say. Anarchist writings do not always mean what they seem to say. However, for tuppence, Freedom Press will enable the reader to judge for himself.
This leaflet, in typical Anarchist fashion, confuses the issue on the question of parliamentary methods. It would have the ingenuous believe that the effort to achieve Socialism through Parliament has failed. Ramsay MacDonald is instanced as a Socialist who was won over by the rich. “As soon as you send anyone to office they turn traitor,” the Anarchist says. The answer to such childish nonsense is: (1) Ramsay MacDonald was not a Socialist, nor was the Labour Party which he led; (2) The Labour Governments of 1924 and 1929-31 were not returned on Socialist programmes by the votes of Socialist supporters; (3) The two Labour Governments did not fail to introduce Socialism because of the illusory character of the vote, but because they were elected on reformist programmes to carry on the administration of capitalism. They learned bitterly that they could not reform out of existence working class problems, and that capitalism can only function in the interests of the capitalists.
That the Anarchists persist in accepting the Labour Party as a Socialist party might be regarded as a measure of what they understand Socialism to stand for. (This leaflet describes the I.L.P. as revolutionary whilst another Anarchist pamphlet issued by Freedom Press, “New Life to the Land,” by George Woodcock, describes the I.L.P. as semi-revolutionary.) To accept the Labour Party as Socialist and to imply it stands for Socialism exposes the Anarchist claim to stand for a classless society and the abolition of the wages system as a mere form of words. A leaflet which sacrifices logic to propaganda argument. Crude, flat—but perhaps the latter was due to the beer with which George and Jack started the argument. 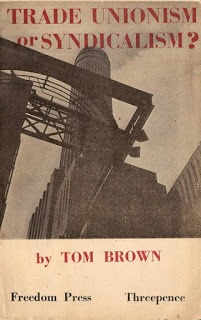 The Take (or Sit) and Hold Theory
“Trade Unionism or Syndicalism?” by Tom Brown (Freedom Press, 3d.).  The author of this pamphlet makes out a case for the Syndicalist practice to replace existing trade union organisation and for the Syndicalist method of taking over the means of production from the capitalists. He discusses what he thinks is the weak spot in trade union organisation, the organising of workers on the basis of their craft, i.e., “according to the tools they use.” The result is that the workers in any one industry find themselves organised in several trade unions (engineering workers are organised in fifty unions). In his trade union branch, usually near where he lives and away from his work, the trade unionist finds his fellow branch members connected with any industry but that in which he himself works. The result is lack of interest. The author advocates workers organised on the basis of one union for each industry. Mr. Brown’s criticisms show all the obvious advantages likely to be gained from organisation by industry. That is, however, not the whole story, as the advocates of the rival conception will maintain, and experience in industries where the industrial idea has been more or less fully applied does not show any startling improvement. Moreover—and this should be remembered by both schools—the border lines of an industry are not always clear and fixed. Hence, for example, the conflicting claims of those who would argue that the railways are a self-contained industry and those who retort that they are only part of the transport industry.
Socialists are, however, more concerned with the further aspect. Mr. Brown does not advocate the one union one industry form of industrial organisation for the workers as an end in itself but as a means also for presenting the class struggle along Syndicalist lines, as a means for wresting ownership and control of the factories from the capitalists. The author proposes the ” Social General Strike,” or the “General Lock-out of the Employing Class” as he would prefer to describe it, and the management and administration of factories and industries along Syndicalist lines by the workers, such industries to be organised on a federal basis. On page 10 he says: “Against this action we hear raised the Social Democratic wail, “If you do that the bosses will shoot and baton you!’ We reply, if you don’t, they will shoot and baton (and starve) you, but with much greater success, as the history of passive starvation strikes shows. But in order to beat the workers, they must first start knocking about their own property, as they discovered in the 1937 automobile stay-in-strike in the U.S.A. If Mr. Brown is saying that the capitalists would acquiesce in parting with the ownership of the factories rather than see them knocked about, the present war demonstrates the contrary. They accept the facts of quite a lot of ” knocking about” even where the certain loss of ownership is not involved. In any case, the sit-down strikes in America, and those in France which he also quotes, were not strikes which had for their purpose the taking over of the factories concerned on Syndicalist lines. Another example is given, with approval, of French shop girls who engaged in a sit-down strike and locked out the customers. Surely they acted wrongly. Ought they not have served the customers and informed the employers that the proceeds were for the benefit of the workers? Commenting on the example of the French shop girls Mr. Brown almost gushes: “And the bloodshed, the vast sea of gore, predicted by the Socialist. NONE!” Might a Socialist humbly suggest that the capitalist state would apply such methods as were dictated by the extent of the menace.
Well written, in a superficially plausible style, the hollowness of the Syndicalist case as stated in this pamphlet is nevertheless almost self-apparent.
Russia To-day
“Soviet Russia in Maps” (edited by George Goodal, M.A., price 2/6, and published by George Phillip & Sons, Ltd.), is a useful addition to an existing library of books on Russia. It consists of thirty-two pages of maps with notes and commentaries illustrating main changes in Russian economics, social and political changes, over seven centuries; it includes figures and comparisons of industrial developments to date.
Harry Waite