Book Review: The Plight of the Merchant Seaman 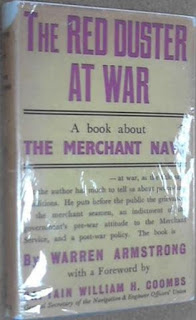 journalist, is intended to convey not only an idea of the merchant navy at war, but also of the lives of seaman both before and during the war; it also discusses, in a vague way, what ought to be done to improve the conditions of seamen and to enable Great Britain to regain her mercantile superiority.
He gives plenty of instances of the bad treatment meted out to ship workers both before and during the war. He refers to salvaged food openly advertised as “suitable for ships’ supplies,” and to the prevalence of chest complaints, due to the close quarters in which most of the seaman’s work is done. He betrays no knowledge of the class division of society. Were he aware of it, his indignation at the conditions might find a different channel for its expression. With society split into, two classes—those who live by owning and those who live by working, and where self-interest presupposes a continual clash between the two, the efforts of shipowners to increase their profits regardless of its effect upon the workers is not surprising.
From a speech made in the House of Commons towards the end of 1938, quoted on pages 146-151, we take the following extract:— .

When Norway was invaded, a lot of Norwegian ships came under British control. A letter is quoted from Captain Coombs, General Secretary of the Navigators’ and Engineer Officers’ Union. The following extracts must be given :—

When Norway and Denmark were invaded, the Officers’ Federation undertook, with the full concurrence of the International Mercantile Marine Officers’ Association at Antwerp, to offer hospitality to Norwegian and Danish officers, and to do everything possible to help them in their very difficult position. Valuable work was done, particularly in ensuring that the proposal to reduce Norwegian pay and conditions to the British level was defeated. (Page 174.)
It would be comic, were it not pitiable, to consider how every nation’s officers and seamen were told, up to 1939, that it was “foreign competition” that made impossible the grant of better conditions of service. . . . And I believe it to be true, unfortunately, that the British shipping indusry was largely responsible for the general unsatisfactory conditions existing in the Seven Seas. (Page 175.)

These quotations show that trade unions can sometimes be very useful to their members, and they also show that even in war-time, the employing class will not relax their efforts to reduce the standard of living of the workers. They clearly understand that the less there is for the workers, the more there is for them.
Speaking of the fishing trade, he says (p. 59):—

Years of an uneasy “peace” slipped uncomfortably past, while herring fishermen tried ekeing out a bare existence “on share,” without dole, without fixed wages. In a world of ships, barrels, coal, baskets, cran, ropes, nets, victuals and salt, sheer poverty was their lot, and the lot of their wives and children. And the children were growing up. . . .

In his crusading zeal in pre-war days the author endeavoured to get an article published in an unnamed newspaper. He wished to “correct the impression some newspaper readers seem to have developed that merchant seamen are a bunch of nitwits or near-revolutionaries. The merchant navy’s got a lot of very real grievances. So, too, have other sections of the shipping industry. The sooner they are aired, the better it would be for everyone concerned.” Later, the editor telephoned:—

About that shipping article. Will you do it for me? Good! Now listen. I had to have a word with the management about it. You’ll have to re-plan it, old man. Lay off saying anything that may call down criticism in certain quarters. Unofficial censorship sort of thing. . . . These are pretty delicate times. And, anyway, there’s a considerable advertising revenue from shipping. Big space-buyers . . . and this is the time of the year when they spread themselves handsomely on cruises. Couldn’t afford to upset them. ’Got to think of policy, you see. . . .
You go ahead and do that article for me. But don’t make it critical. Work it around from the opposite angle—shipping booming, and every thing in the garden’s lovely. Give the owners a boost. Seamen don’t give a damn, anyway. You can slip them in somewhere, if there’s room. Add a sort of romantic touch to the general picture. See what I mean? (Page 168.)

Being compelled, like other workers, to think of bread and butter first, he wrote the article, but endeavoured to get some ideas over “between the lines”—as it happened, unsuccessfully, for two days after the article appeared a body of representatives of the seamen in the two ships referred to in his article called at the newspaper offices and said they wanted to conduct the writer over their quarters and then throw him in the dock!
The author suggests international agreements regarding conditions of work, although recognising the improbability of their being arrived at. International agreements for the benefit of the workers in a world of international competition is difficult to imagine. In the other event—subsidies, a state controlled shipping industry, or trade discrimination in favour of British shipping lines, how is the lot of the seaman to be improved otherwise than by arguing the toss with the capitalist employer or the capitalist state—in either case actuated by the same motive—the desire to cut down costs and increase profit? The only international agreement that will effectually benefit the seaman and other workers is an agreement upon the necessity of doing away with the entire world-wide capitalist system.
Ramo.