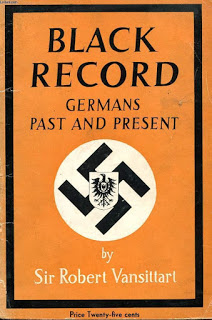 It is an eloquent and impassioned speech for the prosecution of the same one-sided character as foreign writers have often hurled at “perfidious Albion.” He calls Germany a butcher-bird, just as Reventlow, during the last war, called England the vampire of the Continent. In such propagandist works there is always a considerable measure of truth, for no country can show an unblemished record, but they lack the judicial spirit. The writers are so obsessed by the wickedness of the enemy that they try to produce the impression that there never were such monsters of iniquity.

Sir Robert condemns Sir Neville Chamberlain and others for not facing the truth as far as the German character is concerned. The “truth” being, in his estimation, that the Germans are by nature cruel and have been across the centuries predatory and vicious. This he urges over and over again. On page 16 of his pamphlet he makes the following assertion:

Hitler is no accident. He is the natural and continuous product of a breed which from the dawn of history has been predatory and bellicose.

Whatever truth there is in that assertion applies just as strongly to every “breed” that can trace ancestry back to the “dawn of history,” and most emphatically to the Latin nations. What blood and tears stains the history of Italy, of France, of Spain—and may we include England, or does the Germanic strain rule it out?
An incident: is related on page 4 that the author witnessed as a youth in Germany:

I was eighteen at the time, and it was a bitter winter. A starving German lad of my own age stole a cutlet from a butcher’s shop and bolted. He was pursued, caught, and kicked into a mess—not by- toughs, but by apparently ordinary citizens. I tried to intervene, but was told that, if I didn’t stand clear, I would be served the same way.

The incident is given as an example of the fundamental cruelty of the Germans, and is a fair sample of his one-sided method of arguing. It is quite true that the case in point is a horrible illustration of the brutality born of the property instinct, a violation of which is always liable to convert the meekest ordinary citizen of any nation into a temporary fiend—particularly if it is his “own” goods that are touched.
But if we are to accept the incident at Sir Robert’s valuation, what is to be said of a nation that produced the factory lords of the middle of the last century in England, who had little children of six to twelve years of age driven into factory hells to waste their health and limbs working up to eighteen hours a day producing the means to allow their master to live in luxury? Many of them slept in beds that were never cool, and all of them lost youth’s birthright—joy and laughter. Or, again, what of the nations that produced the perpetrators of the atrocities of the Belgian Congo, where natives were mutilated and villages burned if rubber in sufficient quantities was not brought to fill the bottomless maw of the profit-hunting rubber companies? Again, it was Frenchmen who tortured and slaughtered their own fellow-countrymen in 1871 for daring to resist the attack of Germany and establishing a commune in Paris.
No, acts of violence and brutality do not damn a nation, it only damns the motive that inspires the brutality.
War is the culminating brutality, but peace under capitalism is also full of brutalities.
Nazism, Fascism and Russian Communism are modern examples of systematic brutality, but they are each the product of a civilisation whose basis is the subjection and exploitation of the wealth producers.
Democratic countries exhibit brutality in a less glaring form. The hungry man who steals a loaf is not beaten into a mess, he is sent to jail because he has infringed the laws of private property.
Sir Robert rails against the Germans for aiming at world domination. But are they alone in that? What of the Greeks, the Romans, the Tartars, the Arabs, the Turks, the Spaniards, the Dutch? And, also, brother, why is a large part of the earth painted red on our school maps? Sir Robert, standing on a dirty doorstep, hurls his venom at only one of the gentlemen who occupy the other dirty doorsteps.
He also points to the fortunes acquired by Hitler’s fellow-gangsters out of the miseries of millions. But are they alone in that? What of the war profiteers of 1914-1918, who acquired fortunes out of that war? Are they free of dirt?
On page 19 the author writes:

Julius Caesar says that in Germany 2,000 years ago “Robbery has nothing infamous in it ” when committed upon a neighbour.

Now, surely, Caesar ought to know, he was the author of the famous despatch, “I came, I saw, I conquered,” with reference to the Gauls. And, by the way, what was he doing so far away from Rome, anyhow?
Farther on Sir Robert adds:

The Romans knew what their savage neighbours were like as clearly as the French knew later; so the Romans, too, built a Maginot Line and tried to demilitarise the Rhineland.

What a strange illustration to bring forward. The Romans, by cajolery, treachery, cruelty and force crushed their neighbours in ever widening circles until the major part of the known world of their day was under their sway. Then, when weakened internally, largely owing to the fruit of conquests, they were unable to extend the empire further or resist the pressure of their furthest neighbours, so they attempted to stem the impending flood by fortifying their frontiers. Not because the Germans were ferocious, as large bodies of German peoples were fighting in the Roman armies and helping to defend the frontiers.
It is extraordinary that an empire should be chosen as an example, which threw Christians into the pits to be devoured by wild animals, and which brought home captives to Rome to slaughter each other in the gladiatorial arenas for the benefit of a populace that crowded there to see the fun, and whose capricious thumb, pointing up or down, determined whether or not the fallen gladiator should be slain! So well known is the ferocious nature of the old Roman crowd that two thousand years later it is still a common phrase, “butchered to make a Roman holiday.”
We haven’t space to deal further with the over-statements and historical peculiarities that litter the pages of this pamphlet. The Nazi regime can be shown to be brutal enough without this type of approach to the question.
Hitler and his clique climbed to power with the assistance of the so-called “Right” and “Left” wings in Germany. The general dissatisfaction of the German workers with their poverty-stricken conditions gave him his chance and he got the backing of industrial magnates by promising to obtain access to sources of raw materials and markets for German products. He strengthened his position by eliminating his opponents piece-meal and by misleading the workers into the belief that they were poor because Germany was denied access to markets in which to sell the products that would make more work. It is an old and familiar story.
Once in power he has been able to keep it so far by a mixture of coercion and promises of a paradise to come when Germany has conquered its enemies.
The German workers fell for Hitler’s promises in the same way as workers all over the world have for years fallen for the promises of leaders.
One day, however, the German worker will become sick from hope deferred, and that day will mean the end of the Nazi regime, if it does not collapse from outside pressure beforehand.
Gilmac.