Editorial: The Cost of Living Farce

The Government is conducting an inquiry among 30,000 families to discover how they spend their wages. The resulting figures will be used as the basis of a new cost of living index to show from month to month whether and by how much the cost of living has increased or decreased. The old index, which dates back to 1904, is considered out of date, but the new one will be just as farcical as the other. The inquiry is not designed to discover how much good food a human being needs to maintain health and how much money that food costs, but simply to discover how the worker spends his wages. Whether the wages are too low to maintain health is not regarded by the Government as being its business.

Three things show the Government’s attitude in its true colours. The first is the fact that though Government employees for years had a cost of living bonus system, the bonus was never more than part of the full increase in the cost of living. The Government flatly refused to grant the full amount. The second is that at all times thousands of Government employees have been receiving wages which were shown by authoritative estimates to be too low to provide the necessities of life.

The third thing is that the Government, which is spending an extra £1,500 million pounds on armaments, has just refused a request by the Trade Union Congress that the pay of the unemployed should be increased in keeping with the rise in prices (Daily Telegraph, October 18th, 1937).

How inadequate is the level of wages, whether in Government employment or 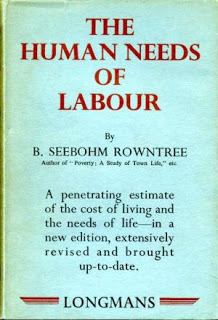 outside, has just been demonstrated again by the issue of a revised edition of Mr. Seebohm Rowntree’s “Human Needs of Labour” (Longmans, 1937, 2s. 6d.).

In it he estimates that at 1936 prices the minimum amount needed to keep a family of man, wife and three dependent children living in a town is 53s. a week. It is assumed for this purpose that the wage is paid for 52 weeks a year (i.e., that the worker has paid holidays) and that he receives 53s. all the time, not only at the time when he actually has three children; because he has got to get his home together, and no allowance is made for this in calculating the 53s. Moreover, the 53s. does not apply to London or to any place where rents and traveling expenses are unusually high. Mr. Rowntree allows only 9s. 6d. for rent and rates and 1s. for travelling to and from work, both of which are absurdly low for London. Mr. Rowntree admits that in London rents may range up to 20s. or 25s. (p. 89) and that his 53s. must be increased accordingly. It would in such cases be in the region of 70s., apart from the inadequacy of the allowance for food, referred to below. The dietary, costing 20s. 6d. a week for the family of five, is based on a minimum estimate of what adults and children need to maintain health drawn up by a committee appointed by the British Medical Association. But whereas that committee specified 14 pints of fresh milk a week, Rowntree substitutes 12 tins of skimmed milk, condensed (p. 84). If fresh milk were allowed for, the weekly cost would be 1s. 9d. greater, i.e., 3s. 9d. a week throughout the year instead of 2s.

Mr. Rowntree admits, too, that if he adopted the diet drawn up by the Health Committee of the League of Nations, a diet designed to secure perfect health—and not merely to prevent malnutrition—it would cost another 6s. a week (p. 160).

For expenditure for the family of five after paying for rent and rates (9s. 6d.), food (20s. 6d.), clothing (8s.), fuel and light (4s. 4d.) and household sundries (1s. 8d.) Mr. Rowntree allows only 9s. to cover everything else, including travel to and from work, entertainment, holidays, books, beer, tobacco, etc., etc. He has the grace to admit (p. 101) that he is “almost ashamed to put forward so low an estimate.” As he says elsewhere (p. 12), out of this 9s., the amount expected to cover “holidays, beer and tobacco, amusements . . . travelling, other than fares to and from work, or contingencies of any kind,” is 3s. 4d. a week, or ” little more than the cost of a cocktail.” Mr. Rowntree’s standard of 53s. (with an additional 15s. or more in London owing to high rents and the cost of travel to and from work, and more still for families with over three children) is, therefore, plainly far below a reasonable or even a minimum  standard for health. Yet everybody knows, and Mr. Rowntree admits (p. 125), that our wonderful capitalism fails to provide even that standard for millions of workers.

When Mr. Rowntree defends the deliberate choice of a standard so low that he is almost ashamed of it because “I want to make my figure . . . one which is unassailable ” (p. 101) he is only saying in a roundabout way that capitalism never will give the workers a standard that is fit for human beings.