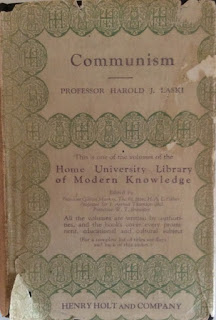 Professor Laski’s book is one of the most informative and interesting of the dozens of interpretations and criticisms of Marx which have appeared since the Russian upheaval. If, in addition to some minor inaccuracies, the book has one or two important failings, these are not due to the absence of ordinary care or to the class bias and lack of imagination which have marred so many of the works of scholastic critics. Professor Laski has succeeded in compressing a great deal of matter into small space, and has admirably summarised certain aspects of his subject. In a brief historical introduction, he covers adequately the development of Socialist theory, and in the other four chapters he deals with the Materialist interpretation of History, Marxian Economics, the Communist Theory of the State and the Strategy of Communism. Lastly, there is a brief statement of Professor Laski’s own conclusions. While the approach to the subject is critical, the writer does not make the common mistake of imputing to Marx or to the Communists “bad” motives (using bad in the popular sense of a departure from conventional capitalist standards).

He does not make the easy assumption that Bolshevist theories are unsound merely because the Bolshevists repudiate capitalist standards of conduct, fight under strange flags and use unorthodox weapons. He is more than fair, he is generous to his opponents, but it is this very generosity which leads him astray. First he assumes that Bolshevist theory and the Marxian philosophy are identical. This is not entirely true and it is unfair to both Marx and to Lenin.

On the one hand it is the boast of many Communists that his practical revolutionary experience enabled Lenin to improve upon the teachings of Marx; and on the other hand, it is misleading to hold Marx responsible for some of the vagaries of Communist thought and action. Professor Laski’s second and most serious failing is one which perhaps he copied from Professor A. D. Lindsay, who recently wrote a book entitled “Karl Marx’s Capital.”

In his preface, Mr. Laski acknowledges his debt to Professor Lindsay in the writing of the chapter dealing with Marxian Economics. On page 61 of Lindsay’s book we read :—

The Labour theory of value is misleading. .  .  . It is primarily interested in what a man ought to get in reward for his labour. .  .  .

On page 95 of the present work; Professor Laski, in explaining the Labour theory, writes:—

Thus we can measure the amount of “labour-power” in each man’s effort, and so determine scientifically how he ought to be paid.

It is clear, then, that at the root of Marx’s view there lies an ethical test of value. Commodities for him .  .  . have an inherent value which is what they would obtain in exchange where society was properly organised .  .  .

Professor Laski apparently picked this up from Professor Lindsay. From what source Professor Lindsay obtained it I do not know, but it is a fantasy so far removed from the Marxian method and purpose that it is impossible for one who sees Marx through these spectacles to grasp his theoretical system as a whole. Marx was not concerned with Utopian societies or with ethical values as a basis for economic theories. His economic doctrines sought to do no more than explain what exists within the capitalist system. For Marx there is no amount that the worker ought to receive, nor was the non-receipt of the full value produced, ever offered as a justification for restitution or for the struggle to rebuild society. Exploitation to the Marxist is not something “wrong,” and therefore to be condemned. Exploitation in various forms has been the necessary basis of different social systems. The need for it is passing, and only that fact calls for and justifies our efforts to establish Socialism. Marx’s economic theories must be judged on their merits, not as contributions to an ideal society of the future. Professor Laski does seriously attempt this, but fails through missing the precise meaning attached to the terms Marx uses. This is his answer to Marx :—

It is clear that if we say (1) that the value of a commodity depends upon the amount of socially necessary labour-time it embodies, (2) that this amount is discovered in the process of exchange, and (3) that the exchange rate is fixed by the value of the commodity, we are really saying that value depends upon value. (Page 96.)

Professor Laski has not distinguished here between “price” and “value.” His statement (1) is correct, (2) is not correct, does not link (1) and (3) together, and therefore does not warrant the conclusion drawn. The amount of labour-time socially necessary is fixed by the conditions of production themselves. What happens in the process of exchange is that value expresses itself in its price form — price fluctuating about value with the varying conditions of the market. Statement (3) is correct only if it means that price is ultimately dependent upon value, the point about which it oscillates. If by “exchange rate” in (3) Professor Laski does not mean market price, then he must mean “value.” Then (3) would read “the value is the value,” which is true but not useful as a step towards drawing a further conclusion.
The second main defect is the assumption that the Bolshevists are orthodox Marxians. To show the lack of justification for this we need take only one illustration : the Commune of 1871. Professor Laski says (38): “The lesson of the Commune is the need for dictatorship. The capitalist class must be repressed.” But neither Lenin nor Professor Laski shows that this is the lesson which Marx drew from the Commune, and it is certainly not the method adopted by the Communards themselves. Lissagary (History of the Commune, p. 172) makes it quite clear that there were no repressive measures, no dictatorship, on the Russian model in Paris then.

Sunday the 26th (March, 1871) was a day of joy and sunshine. Paris breathed again, happy like one just escaped from death or great peril. At Versailles the streets looked gloomy, gendarmes occupied the station, brutally demanded passports, confiscated all the journals of Paris, and at the slightest expression of sympathy for the town arrested you. At Paris everybody could enter freely. The streets swarmed with people, the cafés were noisy; the same lad cried out the Paris Journal and the Commune; the attacks against the Hotel de Ville, the protestations of a few malcontents, were posted on the walls by the side of the placards of the Central Committee. The people were without anger because without fear. The voting paper had replaced the Chasse-pot.

Professor Laski lightly dismisses the defence of democracy put forward by Kautsky in the controversy with Lenin, but Kautsky’s arguments in “The Dictatorship of the Proletariat” have still to be answered by the Bolshevists. We are not defenders of Kautsky’s actions, either since or during the war (we had repudiated his claim to speak for Socialism before 1914, while Lenin, Trotsky and others were still worshipping Kautsky’s reputation and his past) but we claim that the Bolshevists have failed to prove him wrong when he says that a minority cannot impose a new social system from above on a hostile or apathetic majority satisfied with and used to a more backward economic organisation. In this, Kautsky expresses the Marxian viewpoint, as against the “Blanquism” of the Russians. (For a full discussion of this question, see “Socialist Standard,” July, October and November, 1920, and October, 1921)
Professor Laski misunderstands the Marxian doctrine of the increasing exploitation of the workers. Marx did not assume and build hrs theories upon the inevitability of increased poverty. The change he had in mind was the worsening position of the workers relative to the wealth and power of the capitalist class. What he argued was that the productivity of the workers’ increases more rapidly than their real wages.
Thus, in “Capital” (Vol. 1, p. 631), he said :—

.  .  . They can extend the circle of their enjoyments; .  .  .  and can lay by small reserve funds of money. But just as little as better clothing, food, and treatment, and larger peculium, do away with the exploitation of the slave, so little do they set aside that of the wage-worker.

On page 661 he elaborated the point that the workers’ position gets worse, even although his real wages may not fall, but actually rise.
I do not, however, think that Professor Laski would care to contend that in fact the workers in this country have maintained during 30 years the standard of living of 1897.
He offers one or two of the stock criticisms of the Materialist Conception of History. It will not, he says (p. 79), explain “the loyalty of Catholic working-men to their religion.”
It does explain even this. Working-men are loyal to the Catholic religion while that religion continues to play a vital part in a social system which has need for religion. And when the economic development forces to the front the conflicting interests of classes, while at the same time the mechanical processes of industry thrust religious modes of thought into the background, working-men cease to be loyal to the Catholic religion. Can any other theory of history satisfactorily explain this? The Materialist Conception does not rule out or minimise the powerful hold of tradition on men’s minds, but it shows how and why material forces will in time undermine all traditions. For an account of the rapidly waning hold of Catholicism in Germany over the minds of the Catholic trade unionists, readers are referred to the report of an enquiry recently conducted by the Catholic Trade Union Federation (“Socialist Standard” February, 1927)..
No one who reads the book can fail to be interested in the many issues which Professor Laski raises, but it is impossible even to mention here all the controversial points. It is, however, necessary to remind readers that the book necessarily contains many interpretations of events, theories and programmes which are likely to be questioned from one angle or another. It is not an authoritative statement either of Communist policy or of Marxian theory. On the first ground, the Communists question it, as we must on the second. This is, as I have said, necessarily so. Professor Laski is fair, and has no axe to grind, but no man can hope to state fully and with proper discrimination the views of an opponent. It is greatly to Professor Laski’s credit that, in addition to writing an interesting and thought-provoking book, he has so nearly fulfilled that impossible task.
Edgar Hardcastle