Pamphlet Review: Capitalism in the Tropics 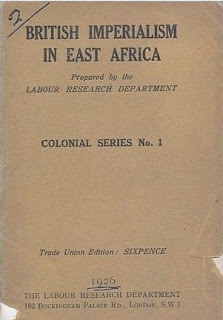 recently published a sixty-four page pamphlet entitled, “British Imperialism in East Africa,” price 1s. Much of the information contained therein has appeared from time to time in these columns, the principal exception being a variety of statistics concerning capital investments, etc.

The pamphlet deals, necessarily briefly, with the expropriation of the native tribes of Kenya, Uganda, Tanganyika, and Nyassaland; and their progressive conversion into wage-slaves, producing foodstuffs and raw materials for the European markets such as coffee, sisal, cotton, maize, hides, soda, etc. The authors also show how the developments in these countries open up markets for the products of European industry, particularly of the “heavy” variety.

The countries mentioned comprise (with Northern Rhodesia) an area of over a million square miles, the total population being roughly only twelve millions, over 99 per cent. of whom are natives. They have come under Imperial control in a somewhat similar manner to that by which India became “the brightest jewel in the British Crown.” Invaded in the first place by mercantile companies who maintained their own armed forces, they soon presented problems with which these companies were incompetent to deal. Africa produced in miniature the same revolts of the populace and mutinies among the native soldiery which led, in India, to the replacing of “John Company” by Victoria, Regina et Imperator. In other words, the forces of the State were sent to the rescue of private enterprise.

In the case of Africa, “philanthropy” and missionary effort formed a very convenient cloak for the hungry figure of capital seeking its constant quarry, profit. It had been, to some slight extent, forestalled by the Arab colonies which had existed for centuries on the East Coast, in perpetual conflict with the Portuguese adventurers. The Arab power was founded upon chattel-slavery, and its periodical incursions among the natives of the interior had for their prime object the recruiting of the slave-markets. To supplant the Arabs and establish the European method of exploitation, it was necessary to stamp out the slave trade.

The hypocrisy of the capitalist found full vent. Gunboats and railways drove the dhows and caravans of the votaries of Allah from the field of commerce, and the blessings of Jehovah were invoked upon the process. The conflict of material interests was disguised by the contest between Jesus and Mahomet.

The up-to-date resources of capitalism rapidly transformed the scene. The various isolated tribes of natives (some living by hunting on the plains and in the forests, some by pasturing cattle, and others by rude tillage) were roughly disillusioned as to the intentions of their “deliverers.” The Arabs chastised them with whips, but the Europeans introduced economic scorpions in the shape of reserves, to which the natives were confined, coupled with taxation upon the hut or the head.
In order to find the money with which to pay the taxes, the natives slowly but surely find their way from the reserves to the plantations and townships, as these arise, there to labour for the profit of the invaders. The sudden raids of the chattel-hunters gave way to the permanent exploitation of the whole population. The fruits of this new dominion find expression in overcrowding, under-feeding and the consequent spread of epidemic diseases previously unknown in the country, with additional disadvantages in the shape of an occasional war. Of the 150,000 unarmed porters raised in Kenya during the campaign to acquire the neighbouring German Territory, over 40,000 were killed or died of disease (page 33). Habits of life which are relatively harmless under native conditions, naturally become the vehicle of pestilence under the conditions of city life, or those obtaining in the now overcrowded reserves.
Other interesting facts dealt with in the pamphlet are the methods by which the capitalist administrative powers corrupt the institutions of the natives. The chiefs become transformed from guardians of their people into the agents of the oppressors. The compulsory labour ordinances, which are found necessary as a supplement to taxation, are enforced by their aid. The result is the development of native organisations in opposition to the whole machinery of government, which the missionaries strive to bring into constitutional channels. Early in 1922, the arrest of the Secretary of one of these native bodies led to a mass protest in Nairobi, and the slaughter of about thirty natives by the police as a reply. (This occurrence was dealt with in more detail in these columns in the issue of July, 1922). In one detail, the pamphlet under review is, here, inaccurate. No attempt was made by the crowd to rush the “prison” where Thuku was detained. The approach of a detachment of troops created a stampede, during which the armed police in the lines lost their heads and fired without orders!
What relationship does this enslavement bear to that of the workers in Europe? Here the pamphlet is confusing. Apparently the authors consider that the workers pay the taxes by which interest on development loans is guaranteed. It should be obvious however that if the taxes were not raised for that purpose the workers would gain nothing. The “saving” would simply benefit some other section of their exploiters.
The authors are on firmer ground when they contend that capitalist development abroad is based upon the extended exploitation of the workers at home. The profits on the commodities of all sorts poured into the tropics by European labour go to the employing-class. The workers have thus no interest in extending markets; but that is not all. Sooner or later the point must be reached at which this development will react upon home conditions. The creation of new proletariat in the tropics intensifies the competition between the workers of the world. It renders their standard of life still less secure, and adds to the ranks of the unemployed. Such are the fruits of imperialism for the wage-slaves. Thus they must eventually unite upon the basis of their common interest, emancipation, irrespective of race or colour !
Eric Boden