Ramsay MacDonald’s Attack on the Workers’ Struggle Against Capital.

MacDonald has written a new preface to a new edition of his book, “Socialism: Critical, and Constructive.” Its denunciation of the workers because they attempt 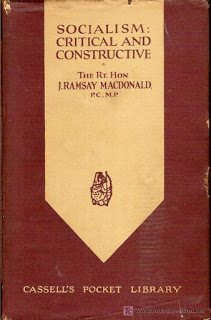 resistance to the encroachments of the employing class has pleased the latter and correspondingly startled many who had never before found cause to doubt the integrity of their leader.

Below are some extracts :—

Profiteering has become universal and action has shown a deplorable tendency to centre in self. The evil has not been confined to the classes generally designated as “profiteers,” but has infected all sections      The trade unionist has the same limitation imposed upon him in this respect as the capitalist— he cannot advance his interests at the expense of his society. No system of thought except Socialism not only makes these limitations of wise action clear, but indicates the method by which Labour may obtain justice.
It cannot be over-emphasised that public doles, Poplarism, strikes for increased wages, limitation of output, not only are not Socialism, but may mislead the spirit and the policy of the Socialist movement.
Socialism calls men to give unstinted service in return for a reasonable reward measured in terms of life, and no one should be more impatient than the Socialist with the fallacy that a man cannot be expected to give the service before he gets the reward.
The Socialist, therefore, looks with some misgivings upon some recent developments in the conflicts between Capital and Labour. They are contrary to his spirit; he believes they are both immoral and uneconomic and will lead to disaster.
It is only when the worker by brain or by hand does his best for society that he will create in society that sympathy and support without which the Labour movement will never attain its goal.

There is no need to criticise these extracts in detail. The worker will recognise in them the arguments used by every exploiter and defender of exploiters, as usual cleverly mixed up with an element of indisputable truth. Of course, no one supposes that strikes, doles and relief, and limitation of output are either Socialism or are in themselves desirable. They are not Socialism any more than they are capitalism. Doles and relief are merely part of the industrial “red cross service”which the capitalists are compelled to organise in order to deal with the increasing number of destitute victims of the capitalist system. Strikes and ca’canny are defensive weapons used by the workers against the employing class. They are difficult, costly, and sometimes dangerous to those who use them, but they are justified if, on the whole, the gains, in the shape of concessions from the masters, are greater than the cost to the workers in loss of wages, hardship, etc.

Capitalism is a system of society in which the wealthy property-owner lives without working, and the poverty-stricken worker toils to provide the wealth of the propertied class. The capitalist to maintain so delightful a situation, makes use of the lockout, limitation of output, and, if need be, the open legal violence of the armed forces. The workers, driven to desperation, make such feeble resistance as they are able, not because the action is in itself something desirable but because it is necessary. It is this which MacDonald sees fit to condemn.

If these actions were in addition, the means of attaining Socialism they would be more than justified from a working-class standpoint, however obnoxious to MacDonald and his masters. Our criticism is that the real way out of the evils of capitalism is simpler and easier than strikes or ca’canny. Given socialist knowledge, the workers have within their grasp the power to control Parliament and the rest of the political machinery, and that control would enable them to establish Socialism. In the meantime they ought and must struggle to defend their standard of living against the employers’ attacks. This and the struggle for power is the class struggle which the socialist recognises as the basis of the political parties and political disputes of modern society.

Even Brailsford, editor of the “New Leader”    (19th Sept.), had to protest against MacDonald’s words, and was reduced to offering the paltry excuse that MacDonald is a “very tired man.” If MacDonald only writes anti-socialist drivel when he is “tired,” then he cannot be the man of vigour his biographers represent him to be. But Brailsford deserves our thanks for a delicious little story he tells illustrating the mentality of the I.L.P. membership.

In his youth he once made the almost fatal mistake of referring to the “class struggle ” at an l.L.P.- meeting. Then “one of our veteran leaders came to me when I sat down, and whispered in his kindly fatherly’ way (though I had shocked him deeply) ‘We never speak of the class struggle in the I.L.P.’ ”

But to be serious again, what MacDonald writes is indeed a piece of staggering impudence. He forgets that he has enjoyed a standard of comfort far above that of the trade unionists whom he charges with profiteering, and it does not fall to their lot to receive the Cabinet Minister’s salary granted by a grateful ruling class to treacherous Labour leaders.

And while we are on the subject of “profiteering,” we suggest that MacDonald might fittingly offer his advice to his generous friend Sir A. Grant. He it was who endowed a library, open-heartedly made MacDonald a gift of £ 1,500 a year for life, and received a Baronetcy.

He also it is whose firm has the reputation of being one of the most grinding exploiters in the biscuit-making industry.