A Ray of Hope— For The Capitalist

At a moment when the capitalist Press and apologists are shrieking to the workers that “business is being ruined” by the huge wages paid to the employees, when drastic wage cuts and longer hours are being enforced in every industry, it will be comforting and refreshing, as well as reassuring, for those workers to turn to the pages of this slim volume.

In its 110 pages the workers who are greatly worried by “the serious difficulties” of the employers, and who wonder how the masters can stand the strain of “high wages” and “bad trade,” will find balm and solace for their harassed feelings. A wave of relief will surge through their minds when they find that, after all, there are a few gleams of hope—for the masters —and even a fragment or two of resources left to them to tide over the present “time of terrible strain.”

The book consists largely of tables and figures dealing with wages, prices, profits, capitalisations, etc. These tables are compiled almost entirely from “official” sources—that is, sources provided by the masters themselves in various Government Departments. It is well known, however, that Government officials are terribly busy men, and thus some of the information they supply is sometimes deficient in certain details. The compilers of this book have endeavoured to make good such deficiencies from other sources.

The essential reason for the existence and continuance of capitalism is Profit— of course, “Fair” Profit—so we will take one or two points from that section first.

The vast majority of business undertakings to-day are in the form of joint stock companies. When these are public companies, they must issue a balance-sheet each year. A useful account and analysis of these balance-sheets, and how they are “arranged” to conceal the truth, is given on pages 31-36 of this work. On these sheets the nominal profits made during the year are shown. These profits are usually tabulated as a percentage of the capital of the company, and here one of the gleams of hope shines, through the somewhat mystifying figures of the balance-sheets.

The ordinary uninstructed person would imagine that the “capital” shown on the balance-sheet was the amount of actual cash invested by the shareholders. Fortunately for the shareholders, this need not be so, and in many cases is far from being so. Sometimes the shareholders are given shares, called “bonus” shares, for which they pay nothing, but on which they are entitled to draw dividends. Thus a company with £200,000 capital might distribute “bonus” shares in the ratio of one new share for every two original shares. This would increase the “paid-up” capital—so called—to £300,000, and the profits would now be reckoned against this new figure, although the shareholders had only provided two-thirds of that amount.

If the profits made in a year were £20,000, this would be entered as 10 per cent, on the original capital, but the same amount of profit would only represent 6.6 per cent, on the new “watered” capital.

On page 92 the following table is given of the Bonus shares issued in 1920, as far as these are obtainable :— 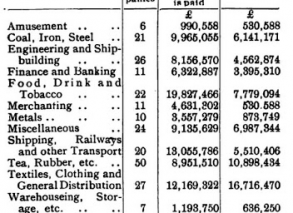 The totals show that bonus shares were distributed over all the industries mentioned, in the ratio of two new shares for every three original ones held; but in certain cases—as Tea and Textiles—the bonus shares distributed exceeded the original capital—in the latter case by over £4,000,000. In some cases bonus shares are paid for, but always at a price below the market rate prevailing at the time. Some instances are given on page 94 :—

“The Imperial Tobacco Co., for instance, issued in 1920 new £1 shares to its ordinary shareholders in the proportion of one new share for every three held, at the price of 40s. ; immediately after this operation the shares were quoted at 55s. 6d., thus enabling the shareholder to sell out his holding and pocket 15s. 6d. per share on the transaction, and enabled the company to increase its reserve (generally entitled ‘share premium account ‘) by 20s. on each share issued.”

Further on we are told :—

“The Aerated Bread Co., for instance, in February, 1920, issued 63,750 £1 shares to its shareholders at the price of £4. The premiums derived from these shares were put to reserve. In the next month, however, the company capitalised these premiums, together with certain other reserves, and issued fully paid-up bonus-shares to its ordinary shareholders in the proportion of one new share for every share held, the new shares ranking for dividend as from March 28th of that year.” ….

“Thus the Shell Transport & Trading Co, issued 6,433,852 £1 shares at par to its ordinary shareholders. The price of the ordinary shares, immediately after this operation, was quoted at £6 ; at this price consequently by selling all these shares, the shareholders would have been able to. make a profit of £38,603,112.”

While on page 100 we read that the coal firm of William Cory and Son “distributed a bonus in April, 1919, of two new shares for every one held.”

Not so bad. Quite a few contingencies could be met from these little emoluments. The worried workers who were so anxious about how the poor employers could exist in the present state of affairs may now breathe more freely. The resources of these employees would seem to at least compare with the funds of the Amalgamated Engineering Union.

Another table is given on page 101 wherein it is shown that the nominal capital of new companies registered in Great Britain (Black-and-Tans are not given in this list) in 1920 was £593,189,032. It is thus evident that those wonderful high wages did not extract every penny from the employers’ pockets.

Numerous other tables are given that are of great interest to the workers, and certain features are shown more clearly by means of charts at the end of the book. We have only room for two further quotations. Referring to war bonuses, we read :—

“Nor did the workers succeed by this means in keeping wages fully abreast of prices, but the advance always followed behind, and never went before, the rise in the cost of living ” (page 14).

While with reference to wages and prices we are told :—

“There is, moreover, no necessary connection between wages and prices. It is significant that the drastic reduction of wages to which the miners were subject at the end of the coalowners’ lockout, was immediately followed by a rise of 3s. per ton in the price of domestic coal ” (page 43).

A most comforting and valuable book. The only regret is that it has not been found possible to issue it at a price within the reach of every worker. Still, even at 6s., it is well worth buying—if one can spare the cash—for it shows that, even without Reparations, the capitalists of this country can still hold out a little longer against the “bad times.”