Book Review: “The Case for Capitalism.”

‘The Case for Capitalism‘ by Hartley Withers (Eveleigh Nash company) 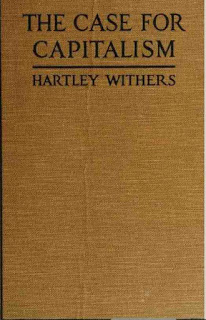 case for Capitalism, and at last it turns up. It is a champion mix-up of truth and error, misrepresentation, and all-round confusion.

To quote the items of interest to us in the book would mean practically repeating the whole work, however, we will deal with a few of the most important passages.

The parts which contain the truth are mere sentiment, and even then are condemnatory of Capitalism rather than favourable to it. Thus on p. 16 Mr. Withers tells us that “the test of an economic system is its success in providing us with a good world to live in “—a piece of daring whose very impudence, in view of the sort of world capitalism has provided for most of us since August 1914, compels admiration.

We are told on pp. 13-15 that under capitalism each one

can choose what work he will try to do and what employer he will try to serve; if he does not like his job or his employer he can leave it or him and try to get another. He cannot earn unless he can do work that somebody wants to buy, and so he competes with all other workers in producing goods or services that others want or will pay for. . . Whatever money he earns in return for his labour he can spend as he chooses. . . . Whatever money he earns by labour or investment he can, after paying such taxes on it as the State demands, hand on to any heirs whom he may name. . . It is thus very stimulating and bracing, and might be expected to bring out the best effort of the individual to do good work that will be well paid so that he and his may prosper and multiply. IF ONLY EVERY ONE HAD A FAIR START and began life with an equal chance of turning his industry and powers to good account, it would be difficult to devise a scheme of economic life more likely to produce great results from human nature as it now is ; by stimulating its efforts for gain and rivalry to a great output of goods and services and by sharpening its faculties, not only for exercise in this purely material use, but also for solving the bigger problems of life and human intercourse that lie behind it.

Here we have a crushing indictment of Capitalism, mixed with a gross misrepresentation of the facts. True, the worker can leave his job— much more easily, generally, than he can retain it. True, he can leave one employer—much more easily, as a rule, than he can find another. True, he cannot earn unless he can do work that someone wants to buy—a million starving unemployed bear witness to the truth of this statement. And just as the worker can leave his job if he don’t mind being out of work, and can leave one master if he cares to take his chance of getting another, so he can spend whatever he earns in whatever way he chooses (within the limits of the law, of course). He needn’t buy food with it if he don’t mind being hungry ; he needn’t buy clothes with it if he can go naked and unashamed ; he needn’t keep his wife and kids with it if he hasn’t any. Oh, there is a wonderful foundation of truth in much that our author writes, but it is travesty all the same.

Labour is frequently used in different senses . . Adam Smith apparently used it as covering all the activities of mind and body required for production. In this sense it covers, of course, the work of the unskilled labourer, and the organising capacity of the manager.

Well, what about it ? Adam Smith’s definition is the true one, because it is the only scientific one. As a matter of fact Socialists have always stressed the fact that the labourer, “skilled” or “unskilled,” the office boy, and the manager, are all members of the working class, that is to say, wage slaves.

On p. 54 Mr. Withers makes use of the old example of Robinson Crusoe on his desert island. He shows Crusoe while fishing with a hook on a line, meditating various methods of improving his economic position. We are told that if Crusoe takes action for this purpose he must run the risk of something happening to render such action useless; e.g., he makes a boat in order to enable him to fish further out, but his boat may be unseaworthy, or the fish further out at sea may be inedible, and so forth. Mr. Withers finds here an analogy to the capitalist investing money. But whether the capitalist runs a risk or not, in investing his money, the fact remains that under capitalism production is carried on for profit, that all profit is unpaid labour, and that therefore any profit the capitalist does get (and there is no doubt about him getting it in the long run) is wealth stolen from those who produce it.

Our author quotes (pp.65-71) G. B. Shaw’s imaginary case of a pioneer cultivating a patch of land. Other “Adams” come along, and the first lets his land to a later arrival. The tenant tills his own land, and also his landlord’s, but in his turn lets patches to other newcomers. Mr. Withers argues that the first “Adam” and the others who let the land are entitled to the rent they receive by virtue of the work they put into the land previous to letting it, and applies this argument to the capitalist class generally, ignoring the fact that they (the capitalists) have received the equivalent of their original many times over, yet their investment is still there, and so long as they let it remain they will continue to draw dividends for it, generally speaking.

Our author on p. 80 quotes Mr. J. Ramsay Macdonald (”The Socialistic Movement“) as saying : “A man can go into the forest and tear boughs off trees with his hands for his fires, but he cannot fell trees without an axe of some kind, which is capital.” An old saying runs : ” One fool makes many.” Capitalists like Lord Leverhulme, and their henchmen like Ramsay Macdonald and Mr. Withers, are very fond of this yarn that the primitive woodman’s axe (Macdonald), the savage’s first stick (Leverhulme), the allotment-holder’s spade (Robert Blatchford), are capital. They all have the one object—to lead the workers to believe that there is no class division in present-day society, that all who own any simple tool are by virtue of that capitalists. What none of them will face is, what is the distinctive character of the means of production which leave the product of the workers’ toil not in the possession of those who produce them, but of those who own the instruments of labour ? That is the rocky point the Artful Dodgers anxiously try to steer their boat clear of.

But to admit the truth of the doctrine of surplus value does not involve an acceptance of the doctrine in the crude form in which it is expounded in the “Communist Manifesto,” where the idea is conveyed that manual labour is the sole producer of wealth. In his later writings Marx seems to express that view at times, . .

This is a deliberate lie, and we challenge Mr. Snowden or any other capitalist hack to find any such statement in any part of the “Communist Manifesto,” or in any writing of Marx, Engels, or any other exponent of Socialism.

Mr. Withers devotes a chapter to the “Achievements of Capitalism.” On p. 129 he says :

It is true enough that Militarism could not have achieved a fraction of its destructive power if Capitalism had not provided the machinery and weapons. ‘What d’ye lack ?’ is Capitalism’s cry, and when humanity said ‘Weapons for killing one another, and see that they kill by heaps,’ Capitalism delivered the goods with a vengeance.

He might have produced a fine dramatic effect by following that statement with a repetition of his previous assertion that “the test of an economic system is its success in providing us with a good world to live in.”

There is an enormous amount of wild statement in the book, travestying the actual facts of life as we find them under capitalism, but limitations of space prevent it being further dealt with here. For the most part the veriest schoolboy would see the absurdities which bristle in our author’s pages, for there is no thing subtle in the “arguments” put forward. Nor is there anything new in them either. They are the old familiar regiment which have been on duty so long, and have been roughly handled so often. They want a rest, and it is significant that Mr. Withers brings up no new  forces to their relief. The truth, of course, is revealed in every fresh effort of Capitalism’s  apologists to put “The Case for Capitalism.” They have no reserves, and their case must  stand or fall by these.