‘All I Can Think About Is The Housing’

A recent edition of Dispatches (Channel 4) highlighted the difficulties faced by women facing homelessness while being pregnant. Born Homeless followed three expectant mothers living in London, and was narrated by one of these, Sam. She is about to be evicted from her room in a shared house because the property isn’t set up for households with children. She approached Lambeth council for assistance months before, but didn’t get much help, presumably because it has been swamped with homeless applications and there aren’t enough affordable properties for people to move to. The day before her eviction is due, Sam returns to the council but can’t see her case officer and so has to wait three hours to be seen by duty staff. A blunt, unhelpful housing officer arranges a placement in temporary accommodation, which turns out to be a dull, unhygienic room in a house shared with seven others. 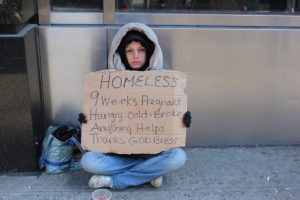 Councils have a legal duty under the Housing Act 1996 to place homeless pregnant women or families with children in temporary accommodation. Sam is luckier than many others. Her placement is in the same area as she lived in before, whereas she could have been placed miles away from her support network or in a hotel room without cooking or laundry facilities. On moving day, Sam says ‘what makes me emotional with it all is…if it’s gonna affect the baby… You just don’t want anything to interfere with the development… I do not want to put the baby in there, I myself don’t even wanna go in there’. Her concerns aren’t just with the poor physical condition of the accommodation, but also the strain of her situation. As Clare Livingstone, Professional Policy Advisor at The Royal College of Midwives says, ‘we know that homelessness leads to stress and ill health in pregnancy and that there are potentially adverse effects for the babies of these vulnerable mothers’ (https://tinyurl.com/qrrrgut).

Sam complains to the council about the shared house and gets moved to a more suitable self-contained (but still temporary) flat, acknowledging that having a camera crew with her probably helped make this happen. Guidelines say that homeless households containing children or pregnant women should only be in a shared house or hotel for up to six weeks before being transferred to self-contained temporary accommodation. Sam says that when she was training to be a social worker, she was supposed to put the welfare of children first, but finds out first-hand that the practicalities of what the system can provide go against this.

The programme also follows Temi, who has been living in hostels and ‘sofa surfing’ with friends or relatives in London for three years. She says ‘to be honest I haven’t really felt the full joy that I’m actually gonna be a mum again, you know. I’m excited and all that but I’m just worried with the space… I’m supposed to be resting and it’s just all I can think about is the housing’. Temi and her two children are staying in sub-standard temporary accommodation with water dripping from the ceiling. She goes to Hackney council to ask about another placement, and is told that they won’t be moved until after her baby is born. When she gives birth she refuses to leave the hospital to go back to the temporary accommodation which will now be even more overcrowded. The council places her somewhere larger, and again, would this have happened without her being with a camera crew?

There are no figures on how many women are pregnant and homeless. An indication of the extent of the problem comes from a survey of 300 midwives across the country carried out by the programme makers and the Royal College of Midwives. Virtually all the survey respondents said that they had seen a pregnant woman who was homeless or at risk of homelessness in the previous six months. Even more worrying, 81 percent had seen at least one pregnant woman who was sleeping rough. (ibid)

There are figures for the number of homeless households which include children. According to the Office of National Statistics, the number of families with children in temporary accommodation in England has rocketed from 37,190 in 2012 to 61,610 in 2018, with a reduction in numbers in Wales (1,250 to 798) and Scotland (3,487 to 3,349). Families with children comprise around 70 percent of the total number of households in temporary accommodation, 93,705 in 2018 (https://tinyurl.com/whg7rvk). But these figures only represent a fraction of those with housing difficulties, as they don’t include single people in hostels or sleeping rough, nor those ‘sofa surfing’ or threatened with homelessness after receiving an eviction notice.

The third family appearing in the documentary is Kady and her two children, who are living in a cramped one bedroom flat provided as temporary accommodation. They have been there for 18 months, competing with 10,000 others on the council’s waiting list for rehousing. Larger families requiring a three or four bedroom property are likely to be waiting particularly long to get social housing, probably years. There is less of a shortage of bigger houses in the private sector, but many of these are owned by landlords who have realised they can make more money by renting rooms individually to students or through councils as temporary accommodation. Most remaining private sector properties are likely to be too expensive or refused to households reliant on benefits.

The families featured in Born Homeless need somewhere secure and comfortable to live even more than other people do, but whether they get this depends on what they can afford. On a low income and with a shortage of cheaper houses, they will face a long struggle to get out of temporary accommodation into somewhere better. The root of the problem is how housing is a commodity, and it can’t be anything else under capitalism. The value of a property, whether in the private or social housing sector, is measured in pounds rather than by how well it satisfies people’s needs.