‘I’ve told every candidate that I’m voting for them,’ says the voter in a Telegraph cartoon just before polling day in December, ‘this election is all about honesty and trust’. Well indeed. As polling fever mounted people were saying this was the most important election in a generation, and all manner of other hyperbolic claims, but what really was different this time was the hot shooting war between fake news and fact checking.

It’s axiomatic that politicians lie. Sometimes they are so blatant they take your breath away, as in the infamous 2016 ‘Boris and the Brexit bus’ affair. Lies by the Vote Leave campaign led to a public outcry and a large number of complaints to the Advertising Standards Agency, but the ASA had no jurisdiction over political campaigns and besides, the Remain lobby was also at it (bit.ly/36oh5u1).

In September it emerged that the Tories had posted a BBC article on proposed school spending to their Facebook page but altered the headline and changed the numbers involved (bbc.co.uk/news/uk-49690325). Facebook removed the page but argued that it wasn’t their job to ‘fact check or judge the veracity of what politicians say’ (bbc.co.uk/news/technology-49827375). This despite Mark Zuckerberg himself being spoofed on Facebook by Democrat candidate Elizabeth Warren, who planted a fake ad to see if Facebook would run it (New Scientist, 16 November).

Then in November a row blew up after the Tories were caught blue-handed in the act of rebranding their press office Twitter account from CCHQPress to factcheckUK. The independent charity Full Fact (fullfact.org), itself founded by a Tory, was furious: ‘It is inappropriate and misleading for the Conservative press office to rename their Twitter account factcheckUK during this debate.’ With astonishing chutzpah the foreign secretary Dominic Raab justified the con as a legitimate stunt, telling BBC Breakfast that ‘no one gives a toss about the social media cut and thrust’ (bit.ly/35d3vcW).

With just days to go before the polls, a new storm gathered over the four-year-old boy forced to sleep on a hospital waiting room floor because there was no bed for him. Footage went viral of Boris Johnson showing no interest in the boy and in fact pocketing the journalist’s phone so he didn’t have to look at the picture. But within hours a new story broke that the whole thing was fake news, on the say-so of an alleged senior nursing sister at the hospital. The hoax claim was swiftly endorsed by Daily Telegraph columnist Allison Pearson (‘Stage a photo. Cause outrage…. Jesus.’) and aptly-named Tory politician Michael Fabricant, yet within hours came the refutation, as Full Fact along with the hospital and even the Health Secretary confirmed that this senior nurse did not exist, that the Facebook account which launched the post had been hijacked, and that the original story was true in every particular. 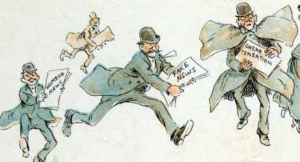 counter-claims, but this time the fact-checking process began almost as soon as the words were out of politicians’ mouths. All parties were predictably found wanting and not even the Greens were spared from the shredder, although it’s fair to say that Labour generally stuck closer to the truth while the Tories were the most shameless and shambolic liars.

Given the outcry over the 2016 Brexit campaign, it was perhaps predictable that similar protests would be made over the conduct of this election campaign. According to the Coalition for Reform in Political Advertising, this was the ‘fake news and disinformation general election’ in which ‘at least 31 campaigns across the party spectrum have been indecent, dishonest or untruthful’ (BBC, 10 December – bbc.co.uk/news/technology-50726500). The Coalition is demanding that fact-checking of political advertising become a legal requirement and quotes a YouGov poll to argue that 87 percent of voters would be in favour. Many eyebrows must have launched skywards at the news that this Coalition is made up of advertising professionals, who insist that politics should be like retail advertising, in which a ‘founding principle’ is the requirement to be ‘legal, decent, honest and truthful’.

Er, come again? This must be what happens to marketing people eventually – they swallow their own hype, become delusional and think they are doing the public a service. Advertising has no such founding principle, in fact no principles at all, that’s why there’s so much legislation to keep it in line.

Will they get their way though? Will political parties be legally bound to tell the truth? Theoretically it could happen, but the ASA are afraid of becoming embroiled in political disputes and thereby bringing the regulatory process itself into disrepute (asa.org.uk/news/why-we-don-t-cover-political-ads.html). Ultimately it’s a philosophical conundrum. What is ‘truth’, and would voters really accept the ASA, or any other body, as the ultimate arbiter of it? Anyway, it’s unlikely that any government is going to see fit to enact legislation that holds it hostage.

It’s no good expecting technology to come up with a fix either. Last year New Scientist ran a story about an AI system that could generate convincing fake news stories and that therefore might, in a kind of ‘It takes a thief to catch a thief’ way, be able to spot other fake news stories. ‘Grover’, the fake news AI, produced a story about how eating bread makes your hair curly. Here’s an excerpt to show how convincing it was: ‘Many people cook a bowl of fresh bread the morning after a hard night of tossing and turning on the sofa. With little thought, people add the crust of the bread to the mix of water and flour… [H]is team found that in European girls, one third of girls had curly hair after eating the leftover crusts of fried or boiled bread and sandwiches’ (15 June, 2019). Think AI is about to take over the world? Not on this evidence.

You probably saw the brilliant ‘deep fake’ video of Corbyn and Johnson endorsing each other’s electoral campaigns (bbc.in/2PcQ5YK). Nobody can be in any doubt now about how good the technology of fakery is. There is an arms race between the misinformation industry and its fact-checking nemesis. Now campaigners can micro-target political ads to Facebook users based on their individual data profiles, circumventing the fact-checkers. The only thing you can do is beware of and be equally sceptical of far-fetched stories supporting your own view as well as those which contradict it. Or get off Facebook. Or at least use your loaf, preferably without boiling it.