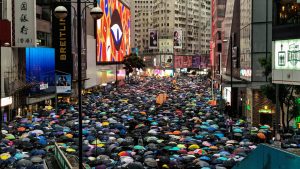 Momentous events are taking place around the world where many discontented workers – Chile, Iran, Lebanon and Iraq, to name a few – are now confronting the status quo governments and demanding change. One of those protest movements because of the importance it has to the world economy and global politics is what taking place in Hong Kong, where there has been a sustained campaign for more democracy, although such calls are now being supplanted with more radical demands. Some consider that the Chinese authorities are acting with restraint considering their past history in the brutal and bloody suppression of the 1989 Tiananmen Square democracy encampment or the totalitarian internment of the Uighurs. But Hong Kong’s importance is a vital financial centre for the Chinese economy and the justified fear of causing a deeper recession deters any military intervention.

After weeks of street demonstrations, which at times escalated into violence against the police and symbols of the state authorities, routine district council elections in November offered an opportunity for people to express their views and attitudes. Unlike Hong Kong’s Legislative Council which is composed of 70 members not all elected by the public, headed by Carrie Lam, who also is not elected by a popular vote but a form of electoral college, which appoints her 29-strong Executive Council to run Hong Kong as a Special Administrative Region of the Republic of China, under the ‘one country, two systems’ constitution where it is in charge of Hong Kong’s internal affairs.

The territory’s district councils in the past have held little political power and mainly deal with neighbourhood issues such as bus routes, no parking laws and rubbish collection. Previously they were not organs of political power, but more like administrative parish councils, allocating budgets for local projects. This all changed when people sought to express their democratic will.

Pro-democracy candidates won close to 60 percent of the total vote, but achieved a landslide in terms of seats – 347 of the 452 (76 percent of the seats) – because of the first-past-the-post system, taking control of at least 17 of the city’s 18 district councils. A record 71 percent of Hong Kong’s 4.1 million registered voters cast their ballot, well exceeding the 47 percent turnout in the district council elections four years ago. Pro-Beijing candidates won 60 seats (13 percent seats with 40 percent vote), losing all but one of the 298 seats they won in the previous election of four years ago. Chinese state media blame the losses upon violence and intimidation by the pro-democracy activists rather than a genuine reflection of people dissatisfaction with the current political system they live under.

When the Industrial Workers of the World chose to drop its commitment to the political electoral process in 1908, James Connolly, at that time a Socialist Labor Party of America speaker, remarked that it would not be possible to stop workers from exercising their vote. Connolly later explained: ‘He fights, and he votes; he votes and he fights. He may not always, he does not always, vote right; nor yet does he always fight when and as he should…’

Although the Socialist Party has irreconcilable differences with Connolly on his nationalism, on this point we share a similar sentiment.

The electoral victory of the pro-democracy candidates in Hong Kong is confirmation of his and our contention that, when a mass movement mobilises and where the opportunity to vote exists, the movement will use the ballot box. The sensible strategy for the social change to socialism can be expected to similar: mass organization and mobilisation outside parliament plus the vote. We say that elections can, and should be, transformed into a means of emancipation

Those pro-democracy activists in Hong Kong who are resorting to violence can’t win against the armed might of the Chinese State and will be crushed. The only chance of winning they had was mass demonstrations backed by public opinion. If they abandon that strategy, the Hong Kong democracy movement is doomed. The overwhelming solidarity vote for them legitimises the will of the people who no longer can be dismissed as an unrepresentative minority of hooligans and rioters.

When the time comes the socialist majority can be expected to use the ballot box since it will be the obvious thing to do, and nobody will be able to prevent them or persuade them not to. At that time it will be the anti-electoralists who will be irrelevant. As socialists, we do not regard the vote in itself as sufficient to emancipate humanity. But we do recognise that it provides by far the best conditions for the development and success of the socialist movement. It can be used to legitimise the revolutionary act by signalling that a majority of ordinary people fully understand and want to effect that change.