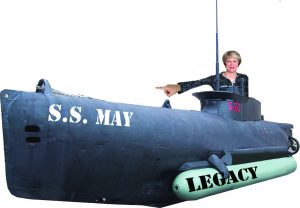 ‘I’ve never seen a politician that didn’t look better looking back,’ as Lee Marvin might have sung, and thus with the benefit of distance posterity may come to view former PM Theresa May more kindly than people do at present, especially if she is replaced by the unspeakable Boorish Johnson. May spent her last days in office frantically legacy-building, living up to her old Cabinet nickname of ‘the submarine’ by launching a few ticking torpedoes before retiring to dry dock in the back benches. One of these was a £27 billion cash boost for the education budget, which her successor will have to pay or else look bad by wriggling out of (Sunday Telegraph, 16 June – https://bit.ly/2WMtuCS).

But £27 billion is nothing compared with her Parthian shot par excellence, which will stuff not only her immediate successor, but several successors after that, as well as every political leader in virtually every country in the world for the next 30 years.

In short, she decided to adopt the desperately-ambitious recommendations of the UK Climate Change Committee and formally commit the UK to net-zero greenhouse gas emissions by 2050.

Pause a moment to consider with amused schadenfreude the behind-the-scenes panic and pandemonium this announcement must have caused. The mandarins of the British state have no idea how to enforce this commitment, but they do know there is no chance whatever of doing so without resorting to extreme and probably unpopular measures. Somehow, for a start, they have to get the rich employers on side and persuade them to bear the extra costs of reducing industrial and commercial emissions to net zero, while still managing to remain competitive with players on the international market who are facing no such costs. Then there is the problem of upgrading the aged and inefficient housing stock with insulation and heat exchangers when neither state nor most private householders can afford it, while also telling the population to turn down their thermostats and wear extra jumpers in winter. The new runway at Heathrow will surely have to be cancelled, and people persuaded against foreign holidays in favour of camping or caravanning at home. Then there’s your filthy fossil car, your fat-making sugar and meat diet, your cheap fashionista clothes shipped over in containers from fire traps in Bangladesh – you name it, you’ll probably be told to stop doing it.

Good, you might be thinking. We can’t beat climate change without making a few personal sacrifices. But here’s the thing – who’s going to make the Duke of Westminster turn his damn thermostat down? Who’s going to legislate the rich into painful personal sacrifices equivalent to those being forced on workers? Who’s going to take their private golf courses off them, or cancel their champagne and truffle banquets or stop their Lear jet flights to exclusive private resorts? Nobody, that’s who, because governments don’t get to tell the rich what to do. If anything it’s the other way round. The rich are all for reducing emissions, as long as they’re somebody else’s emissions. Knowing this, just how cooperative are workers likely to be?

And personal privations aside, what is the likelihood of all the competing ruling elites of the world forming a grand environmental alliance and sharing the eye-watering costs of a shift to net-zero, without sooner or later one or more of them succumbing to the lure of the fast buck and reneging on the deal? Capitalism is about making money and the rich are more devoted to that objective than they ever are to cooperating with each other, even for the sake of the common good.

The brilliance of Theresa’s coup is that, unlike David Cameron, she gets to look heroic as she dumps this monumental task on the table and then runs off through a cornfield. Whoever succeeds her, even the Bullingdon Bozo, will probably not want to go down in history as the one who ‘did a Trump’ and backed out of the most ambitious climate commitment made anywhere to date. More likely now is that the other world leaders will be eyeing each other nervously, wondering who is going to be next to try to carve their name into the history books. Now the precedent has been set. Call it the Thunberg factor, but populations will be in riotous mood should politicians not be seen to answer the net-zero call, even if those same populations are not necessarily clear about the personal implications.

The only realistic way out for May’s successors, and for capitalism, is to sign up to the draconian commitment in principle and ignore it in practice. But will they keep getting away with that? People already don’t believe anything politicians say. A recent survey suggests that only 6 percent of the population believe that politicians understand their concerns (Guardian, 16 June – https://bit.ly/2RgyzlV). Back in 2010 a similar poll found that only 7 percent rated politicians’ honesty as high and 58 percent rated it low or very low (https://bbc.in/2Rjb1fW), while a more recent survey in 2016 suggested that 25 percent of the population thought robots would make better politicians than humans (https://bit.ly/2WHmuHz). Socialists have a better idea. Abolish politicians along with the rich and manage the world democratically. Then you’d see an effective climate policy.

Somebody who should lift your spirits a little is Kal Turnbull, the young man from the Scottish Highlands who at the age of 17 set out to combat all the ranting hate and abuse of polarised social media with one simple and ingenious idea. Aware of his own parochial background and limited knowledge, he set up a Reddit channel called Change My View, where users post genuinely-held ideas or beliefs on any subject and then invite other people to come forward with rational arguments for changing this view. What’s needed, he thinks, is to ‘reframe our relationship to being wrong. It’s not necessarily a negative thing. It doesn’t have to be a humiliating thing. It’s a chance to lose some ignorance, and perhaps gain some insight’ (https://bbc.in/2MR7sPB).

Don’t you just love this guy? If only the rest of us workers had this kind of unprepossessing honesty and intellectual integrity, we’d sort out the world’s toxic obsession with capitalism in short order. Of course it’s slightly disappointing to learn that he’s now trying to monetise the whole idea, but hey ho, that’s capitalism for you.