Steps to a New World 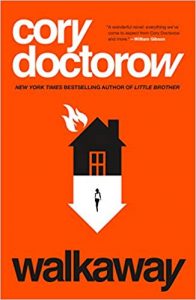 In the not-too-distant future, a form of 3D printing has made post-scarcity possible, so plenty of goods can be produced with very little labour. Some workers are still needed (police, for instance), and there is a small class of super-rich, referred to as zottas, the 0.001 percent. But many people, who the money economy has no use for, choose to walk away and live their own lives, adopting a gift economy based on people contributing what they can (‘Everything freely given, nothing sought in return’).

There are many nice touches. The opening scene is set in a ‘Communist party’, at which there is free beer. Money is described as the problem, something which ‘only works if there isn’t enough to go around’, and economists are likened to astrologers. The whole walkaway set-up is based on co-operation, with people pitching in where possible. Even asking someone if you can help means deferring to their authority: ‘If you want to work, do something’.

Standard capitalist society is known as ‘default’, and there is a memorable description of capitalists: a so-called job creator is really ‘someone who figures out how to threaten you with starvation unless you do something you don’t want to do.’ They are naturally not happy with the ideas and reality of the walkaways and, without giving away too much of the plot, make various attempts to undermine and wipe out those who have walked away. These often fail, though, as many of the rent-a-cops brought in to do the dirty work turn out to know at least some of the walkaways and so abandon their weapons. This is on the basis of the theory of six degrees of separation, that we are all connected to each other by a small number of steps.

It may be unavoidable, but much of the dialogue reads like political speeches rather than the way people actually talk to each other. Still, this is a thought-provoking look at a way of life built on rather different principles.