The Tempest by William Shakespeare (Attic Theatre Company)
I love the theatre. The immediacy of it all, its live spontaneity; with actors often 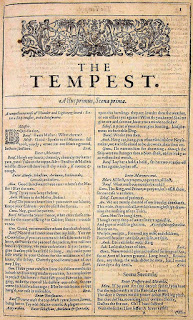 within touching distance, sharing the intimacy of feelings and actions with a rapt audience. An inspiring performance of a great play can be an unforgettable experience, living on in the memory and affecting the way we see life, helping us better to understand ourselves and the world of which we are a part.
I feel engaged with life when watching serious drama, even if occasionally—as I shared with readers last month—a performance is so pretentious and perfidious as to make me want to boo. So it was with pleasure that I anticipated seeing an open air production of Shakespeare’s The Tempest whilst on holiday in Cornwall.
I’ve been lucky. I’ve seen a dozen or so performances of The Tempest. It is a favourite play. Like many plays it is hugely revealing of the time in which it was written (1613): with displaced monarchs. the colonisation and exploitation of a mysterious and a supposed alien world, the developing “magic” of science. But more than this it is clear that Shakespeare wrote himself into the central figure of Prospero, intending The Tempest to be his last play, and in the epilogue it is Shakespeare as well as Prospero who takes his leave of the audience in the final couplet:

“As you from crimes would pardoned beLet your indulgence set me free.

The Tempest is a play about power, about the possibility of change for the better, about love and forgiveness. It is full of unforgettable lines, wonderful images, and a prevailing sense of optimism. It is, so it seems to me, a life-enhancing masterpiece.
The little group of actors (from the Attic Theatre Company) presenting their performance had a problem: they were seven in number, whereas Shakespeare names twice that number of characters in the plot. The usual way of dealing with such challenges is for members of the cast to play two or more parts; helping the audience to recognise which part they are playing by adding or subtracting some article of clothing as necessary, and/or by affecting some physical transformation—changing the voice or manner of walking, or whatever.
The seven talented actors who played with such energy and commitment for us had been directed otherwise. They each played many parts. The programme alerted us to what was planned:

“Though texturally based, the performers are not playing any one part, and indeed are many characters. In this way the performers explore the unity and disparity of the human condition, the conflicts and harmonies within, giving a rich three-dimensional form to the text, the story, the characters and even the scene.”

Thus we were introduced to five Prosperos who appeared singly, but once or twice as a five-strong group; two Mirandas and two Calibans; and various numbers of other characters.
Whilst it is one thing to recognise that as human beings we all have common features— emotionally and psychologically as well as two eyes and two ears, etc.—it just isn’t true that people are composites in the way that is implied by having five people play Prospero. Whilst Prospero might in some sense be seen as a surrogate for Shakespeare, to suggest in consequence that since Prospero is Shakespeare’s construction all the other characters in The Tempest are “facets of him (Prospero)” and that “It is his tempest and out of him comes everything and everyone,” seems perverse. And in any [way] even if all we see is part of Prospero’s dream, shouldn’t all seven players appear as Prospero? Why only five? Shakespearean comedies may be surreal but they are not fantasies. Their enduring attraction for people is a consequence of the clear basis in the common currency of human experience.
And we recognise the complexity of ourselves and others well enough. Decent actors— and certainly the actors on view from the Attic Theatre Company fall easily into this category—are able to transmit the multi-dimensional complexities of the people they are playing. We don’t need two or more physical representations on stage to make the point. And crucially people are not interchangeable in the way that is suggested in this production, and to imply otherwise is just plain wrong. It is not only a matter of individuality but also, and much more telling, of social status and class. Imagine one of London’s homeless men or women turning up at the Bank of England and informing the surprised commissionaire on duty that they were standing in for the Governor for the day. Just imagine.
Shakespeare clearly knew more about the realities of living in a class-divided world that the worthy director of this production. Shakespeare would never have made the mistake of assuming that two drunken sailors could stand in lieu of the Duke of Milan. He had a surer purchase on the realities of economic and social life. His play may be set on a remote island, but that island is rccognisably part of the real world of the seventeenth century. In contrast the world presented by this production is a world without social and economic reference points, an unreal world, a wild fantasia, a world finally stripped of meaning. Whereas Shakespeare’s text carries significant messages for humanity, this production has none.
I felt sorry for the audience at the end of the performance. Being familiar with the play I could largely follow what was going on in this schizoid production. But I felt angry. How could someone so transform one of the world’s great plays as to make it largely inaccessible to an audience? If, as an acting exercise, members of the cast wanted to investigate what it felt like to play a variety of roles, that is one thing. But why inflict the exercise on an audience as a counterfeit of a great play? And how dangerously naive to suggest that people are interchangeable. Not in a class-divided world they aren’t, and for the director to imagine otherwise suggests that it is he and not Prospero who is dreaming.
Michael Gill