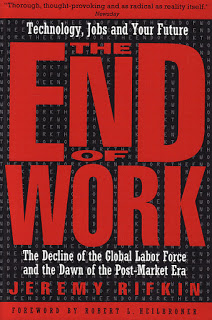 The End of Work. The decline of the global labour force and the dawn of the post-market era by Jeremy Rifkin (G.P. Putnam. New York, 1995)
Rifkin argues that: ” . . . for the first time, human labour is being systematically eliminated from the production process. Within less than a century,’mass’ work in the market sector is likely to be phased out in virtually all the industrial nations of the world“.
His book is thought-provoking and discusses an issue that many economists avoid – that we have entered an era when the traditional work patterns have changed. The consequences that technological unemployment brings reverberate in every aspect of society. Rifkin estimates that in the USA, 90 million workers out of a total 124 million could potentially lose their jobs. Capitalism breeds the alienation in the young who turn to crime and the bleak futures faced by older workers, who in their economic insecurity have fears such as house repossession.
The book can be divided in two. indicated by the subtitle, ‘the decline of the global labour force and the dawn of the post-market era’. The first four parts (fourteen chapters) deal with the background and the decline of the global labour force – the strongest sections of the book. Rifkin’s strength is that the book is historically situated. It has its parallels in Volume I of Capital, where Marx analyses the historical tendency of automation to eliminate labour-power (chapter 15 – Machinery and Modern Industry). The book is well-researched, and although Rifkin is not saying much new, it is presented in an engaging manner.
In chapter I, Rifkin argues that workers are unprepared to me
et the demands of global capitalism:

“The idea of a society not based on work is utterly alien to any notion we have about how to organise large numbers of people into a social whole, that we are faced with the prospect of having to rethink the very basis of the social contract.”

As a liberal, Rifkin does not give up hope of workers benefitting through piecemeal reforms that would increase pay and improve working conditions, but he has grave doubts:

“The new economic realities of the coming century make it far less likely that either the marketplace or public sector will once again be able to rescue the economy from increasing technological unemployment and weakened consumer demand.”

Although not the solution that socialists support. Rifkin proposes what he terms the “social economy”, which is discussed in the chapters on “the dawn of the post-market era”.
Rifkin proposes two courses of action to make the transition to “the post-market era”. Firstly, productivity gains to be shared among workers so as to bring about an equitable re-distribution for an equitable share of the fruits of technological progress. Secondly, that the shrinking of mass employment in the formal market economy and cuts in public expenditure bring a need to focus on the third economy – the social economy – which would, argues Rifkin, meet the needs that are not met by the market and public sectors.
His strategies for dealing with technologically displaced labour are nothing new and include reducing the working week, spreading employment amongst a greater number of workers without sacrificing productivity, an index-linked minimum wage and compensatory welfare payments. What Rifkin argues here has become common in political circles especially among the communitarian movement in America and the “stakeholder society” of Blair’s New Labour.
Rifkin, like many who call for what Diane Elson terms the “socialisation of the market” places emphasis on unpaid voluntary work to regenerate the community. The only positive aspect of this for
socialists is that volunteering shows that there is no need for the capitalist system of buying and selling. However, the reforms that Rifkin proposes would not in the long term be of much benefit to workers. If a Social Democratic “consensus” government was to begin to implement these reforms it would only cut into profits and future investment, thus meeting resistance from the capitalists.
Rifkin ends the book with a warning. “The end of work could spell a death sentence for civilization as we have come to know it. The end of work could also signal the beginning of a great transformation, a rebirth of the human spirit. The future lies in our hands.” Indeed it does, and we don’t want our futures to go to waste under capitalism.
Rob Smith