Book Review: No wonder they hate him! 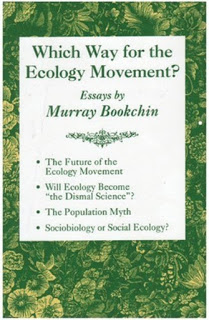 Which Way for the Ecology Movement? by Murray Bookchin, AK Press, £4.50.
According to Bookchin, the ecology movement has a choice: either it can realise that capitalism is the cause of ecological damage and work to end capitalism or it can retreat into “ecomysticism” blaming science, technology and reason as such, calling on individuals to adjust their personal lifestyles so as to better attune with “nature”.
Bookchin takes up basically the same position as us that, for humanity to produce and consume in ecologically acceptable ways, it must first replace capitalism and its drive to make profits with a system of common ownership, democratic participation and production for use, which can make full use of modern science and technology but for ecological and human ends instead of profit.
Bookchin is a good polemicist and it is a pleasure to read him berate the “deep” ecologists (who say a fly is of equal worth with a human), the ecofeminists (who extol “feminine intuition” as opposed to “male” rationality), the Earth Firsters (or People Seconders), the population bombers (like Paul Ehrlich), the Gaia worshippers and the rest of the New Age irrationalists. No wonder they hate him! But they deserve it, since what they advocate is not just a diversion from the real solution but, in attacking technology, science and reason, is also a rejection of the body of knowledge and mode of thought that, once capitalism has been ended, would have to be used to clear up dire ecological destruction wrought by capitalism.
Adam Buick