Socialism or Managing the Peace? 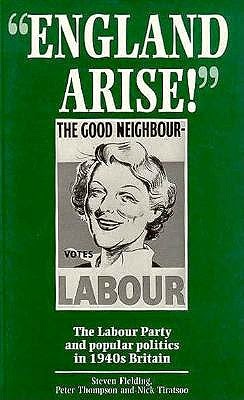 The thesis of this book is that the leaders and activists of the Labour Party saw their election victory in 1945 as the beginning of a transition to socialism which they genuinely wanted to achieve, but that the attempt failed because most people, even those who had voted Labour, didn’t want socialism.

It’s a point of view, but how do the authors back it up?

First the easy part-showing that most people didn’t want socialism, even in the sense Labour meant it. Basing themselves on opinion polls and social surveys the authors are able to demonstrate that what most people wanted was a steady job, good wages, decent housing, a comprehensive health service and improved social benefits. At the level of aspirations most people’s ideal was to own their own home—a house with a garden in fact, and a fence around it to stop neighbours prying—an ideal that had more in common with the Tories’ rhetoric of a property-owning democracy than Labour’s collectivism.

People, the authors say, voted Labour in 1945 not because they wanted socialism but for pragmatic reasons. They felt a Labour government would manage the transition to peacetime economy better than the Tories and they liked Labour’s promised social reforms in the fields of health, social security and housing. Even the miners “supported nationalisation because it was bringing better wages and security of employment, not a new set of socialist relationships”.

But did the Labour leaders want socialism and see themselves as trying to achieve it? In chapter 4 on “The Vision of Socialism”, the authors argue that they did. The 1945 election manifesto declared that the Labour Party’s “ultimate purpose at home is the establishment of the Socialist Commonwealth of Great Britain”, but then underlined quickly that this was an “ultimate” purpose not an immediate aim: “Socialism cannot come overnight, as the product of a weekend revolution.” In fact, they didn’t think it would come by any sort of revolution but gradually over a longish period of time. How long? According to Fielding, Thompson and Tiratsoo, “some suggested that socialism would be achieved by 1960 at the very earliest, others talked in terms of it taking at least a generation”, i.e. within 15-30 years.

Why the delay? The authors suggest that the Labour Party held the following position: Socialism required two conditions, a developed industry that had outgrown the stage of individual ownership and a majority who wanted socialism; the first existed but the Labour Party could seek power before the second condition was met and use it to create a framework for socialism (taking industry out of private hands and setting up a welfare state based in need, not ability to pay) while at the same time seeking to win over the population to socialist ideas and values.

It is doubtful if most Labour leaders and activists did in fact theorise their views to this extent, but it does sound plausible as the sort of answer they might give if confronted with criticism from people like ourselves that in practice all they aimed at was to try to humanise capitalism.

Apart from committing the mistake of believing in “socialism in one country” where this view went wrong – if, for the moment, we concede the Labour leaders really did have a strategy for achieving socialism rather than state capitalism, admittedly an enormous concession—was in imaging that the cause of socialism could be furthered by assuming government responsibility while a majority remained non-socialist.

You can’t win power first—nor by winning an election on a programme of reforms to capitalism (as proposed by Labour) nor by armed insurrection (as proposed by Lenin)—and then educate a majority into wanting and understanding socialism. If you try this you just end up governing capitalism in one form or another because one of the essential preconditions for socialism—a conscious, participating socialist majority—is not there.

People can’t be led into socialism; nor can it be imposed on them against their will. There can be no socialism without a socialist majority, and a majority must have come to want and understand socialism before the political party they form win control of political power.

This book’s thesis may be partially wrong but it is still a useful contribution to understanding the period of Labour government from 1945 till 1951 when, contrary to the expectations in 1945, the Tories were voted back in again (and on two subsequent occasions) and any dream of “establishing socialism” by 1960 or 1975 evaporated.