On 18 May Richard Headicar. on behalf of the Socialist Party, debated the issue 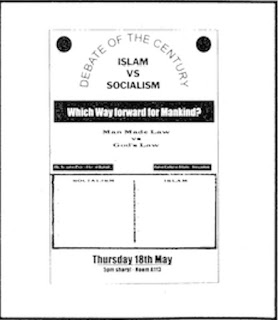 of “Islam v Socialism” with a representative of the Luton Cultural Islamic Society before an audience of 300 or so.
The University of Luton Islamic Society, who organised the meeting, however. did not have the common decency to stick to the agreed title in the tendentious leaflet (right) it put out for the meeting.
The agreed title had been, as advertised in the Socialist Standard, “Do We Need God: Which Way Forward for Society?” Obviously we would not have agreed to debate “Man-made Law Vs God’s Law”, since we don’t believe in “law” nor do we think that human social institutions should be solely “man”-made. This last point probably never occurred to the Islamic Society as, at the meeting, the women present were all segregated in a separate area at the back of the hall.
Nevertheless, Richard Headicar stuck to the original title and argued that humanity doesn’t need the concept of an abstract, all-powerful supernatural being to achieve a better world: we could do this ourselves by our own efforts, aimed at achieving the framework of common ownership and democratic control within which the present state of human misery could be overcome: the concept of a god and god given laws was a diversion and a hindrance to this, all the more so since there is in fact no god. Humans made god in their own image not the other way round and we alone can help ourselves.
Jamal Harwood, for the Luton Cultural Islamic Society, argued that common ownership was against God’s law because some passage in the Koran favoured private ownership. Since we don’t accept the Koran (or any other book) to be Holy Writ the argument didn’t get very far.
Hopefully, however, we will have sowed the seeds of doubt in the minds of at least some of those present. Other-wise they are in for a life of submission and self-debasement incompatible with human dignity.