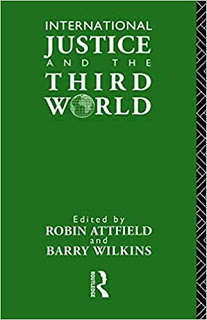 This is a collection of essays by moral philosophers on the apparent dilemma raised by the plight of the Third World: have the people of the developed capitalist parts of the world a moral duty to cut back on their personal consumption in order to prevent starvation in the Third World? Does wealth have to be taken from Paul to feed Peter?

Archbishops and Greens answer “yes”, but some of the contributors to this book show that the dilemma does not exist as the world could produce enough food for everybody. “For the foreseeable future”, writes Kai Nielsen, “we have plenty of available fertile land and the agricultural potential adequately to feed a very much larger world population than we actually have. Less than half of the available fertile land of the world is being used for any type of food production”. This means that starvation in the Third World could be eliminated without having to reduce the standard of living of workers in the First World.

This, however, requires a change of economic system, to one variously described by the best contributors as “an economic system whose underlying rationale was production to meet human needs and which was controlled democratically” (Kai Nielsen), which achieves “emancipation from the world market” through the “global common ownership” of “planetary resources” (Andrew Collier), a global “participatory-democratic control of production to serve collective human good” (Geoffrey Hunt).

The other contributors have less interesting things to say.