When the Cold war ended, the USA found itself deprived of its anti-Communist 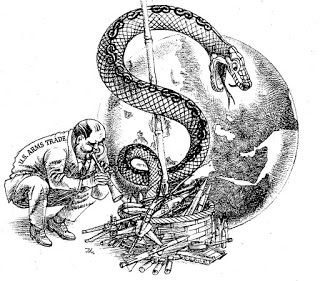 The NWO is real enough . . . its basic features were coming into force 20 years ago with the emergence of a tri-polar world as economic power diffused within US domains. The US remains the world’s leading military power, but its economic security has declined. . . . With the collapse of Soviet tyranny, the US is more free than before to use force . . . In the NWO, the Third World domains must still be controlled by force (Guardian, 10 January 1991).

The Bush administration is well aware of this. In March this year, the US Defence Department drafted a policy to:

ensure that no rival . . . is allowed to emerge in Western Europe, Asia or the territory of the former Soviet Union . . . the US must show the leadership necessary to establish and protect a new order that holds the promise of convincing potential competitors that they need not aspire to a greater role or pursue a more aggressive position to protect their legitimate interests (Guardian, 9 September).

Peregrine Worsthorne was certainly thinking along the lines of US capitalists in the wake of the Cold War when he wrote that the task is to “to help build and sustain a world order stable enough to allow the advanced economies of the world to function without constant interruption and threat from the Third World”. (Sunday Telegraph, 16 September 1990).
Is it not a further irony that the US needs just this kind of “interruption and threat” to re-assert itself, exploiting its monopoly in the security market to reap economic rewards. Were the US to slash its defence budget by 25 percent in the next five years, as recently pondered by the Pentagon, it would face the prospect of pulling out of many of its bases in Europe and the Far-East. This would, as Francis Fukuyama pointed out “in turn stimulate real pressure for regional rearmament” (Guardian, 9 September).
But who would those nations wishing to re-arm buy weapons from? You guessed it and the US would always have the pretext to invade any up-and-coming tyrant who had a few too many weapons.
We should expect wars to be still on the capitalist menu in coming years.
John Bissett