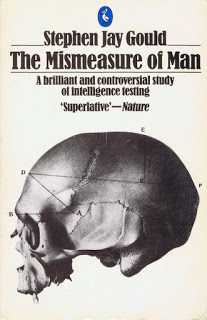 The Mismeasure of Man. By Stephen Jay Gould. Pelican.

If intellectual dishonesty was a crime most of the 19th century racist scientists would he put on trial today. What they did was to concentrate on oppressed and disadvantaged groups—races, classes, and women—and come up with evidence claiming to show that they were biologically inferior and so deserving of their inferior status. In this they confirmed existing prejudices and allowed those who held them to believe that these had a scientific basis. It was the worst intellectual crime of the century.

This sordid history has been documented by Stephen Jay Gould in this excellent book where he shows that all the leading 19th century biologists followed the conventional view that blacks were inferior to whites. The lead was given in the 18th century by Linnaeus himself, the man who laid the basis for the classification of all living things which is still used today, and by the Scottish philosopher David Hume. Linnaeus distinguished between a homo sapiens afer (the African black) “ruled by caprice”and a homo sapiens europaeus “ruled by customs”. Hume wrote: “I am apt to suspect the negroes and in general all other species of men . . . to be naturally inferior to whites”.

Cuvier, one of the pioneers of both geology and palaeontology as well as of comparative anatomy, considered Africans to be “the most degraded of human races, whose form approaches that of the beast and whose intelligence is nowhere great enough to arrive at regular government”. Even Darwin took it for granted that Negroes and Australians (aborigines) were biologically inferior to “Caucasians (whites).

Both sides in the pre-Darwin debate amongst Creationists about the origin of different human races— monogenism (which held that all humans were descended from a single Adam) and polygenism (which held that the different human races were descended from different Adams)—argued, on different grounds, that blacks were inferior to whites. The monogenists said that races were the product of a degeneration from the perfect humans of the Garden of Eden, the blacks having degenerated more than the whites. The polygenists such as the leading American naturalist of his day Louis Agassiz said that blacks were a separate, inferior biological species to whites who were not entitled to share in the “Equality of Man”.

Scientific evidence to back up these prejudices was provided by craniometry which was the leading numerical biological science of the 19th century. Those who practised it believed that, by measuring skulls, they could establish intelligence. Their findings invariably claimed to show that blacks (and women) were inferior.

Gould shows that this continued into the 20th century when craniometry was replaced by psychological testing as a way of supposedly measuring intelligence. Both were based on the fallacy that intelligence was some measurable thing located in the brain which allowed people to be graded into a single series. Like craniometry, IQ testing came to the conclusion that the poor, blacks and women were inferior because of their biologically-determined mental inferiority.

Gould re-examined the data of some of these scientists and found their evidence to be invalid. Sometimes it was simply faked, but in most cases it had been unconsciously biased by acceptance of the prejudices of the time. His conclusion is a devastating rejection of the claims of all forms of biological determinism:

The classical arguments of biological determinism fail because the features they invoke to make distinctions among groups are usually the products of cultural evolution. Detcrminists did seek evidence in anatomical traits built by biological, not cultural, evolution. But, in so doing, they tried to use anatomy for making inferences about capacities and behaviors that they linked to anatomy and we regard as engendered by culture . . . We now believe that different attitudes and styles of thought among human groups are usually the non-genetic products of cultural evolution. In short, the biological basis of human uniqueness leads us to reject biological determinism. Our large brain is the biological foundation of intelligence: intelligence is the ground of culture: and cultural transmission builds a new mode of evolution more effective than Darwinian processes in its limited realm—the “inheritance” and modification of learned behaviour.

Racism, as a variety of biological determinism, has no basis in biology or any other physical science. It also denies. as we point out in our pamphlet on Racism, the real division of capitalist society— class division—and the urgent need for workers everywhere to cooperate to end capitalism. Racism is an issue which the working class must deal with as an obstacle to their progress to a sane, free, humane social system.